The corona economy: Will Europeans face the challenge with solidarity, or splinter apart?

Massive rescue packages on both sides of the Atlantic have been passed to bail out the hardest hit industries, prevent layoffs, provide fast relief to those unable to work and in other ways dampen the worst immediate impact of the new recession. Italy, together with France, Spain and a handful of the other EU countries suffering most acutely, have pressed for Eurobonds. However Germany and the Netherlands appear unlikely to budge in their opposition. A fairly deep recession is expected, though without an effective pan-European action it will strike very unevenly across the continent.

The European Central Bank’s latest release of interest rate data – from each European market as of January 2020 – shows that, already prior to the coronavirus outbreak, rates had shifted direction, now moving upward.

This increase was driven primarily by Germany, France and Italy, with the UK and Sweden outside the Eurozone, along with several smaller countries in and outside the zone, also seeing small jumps. 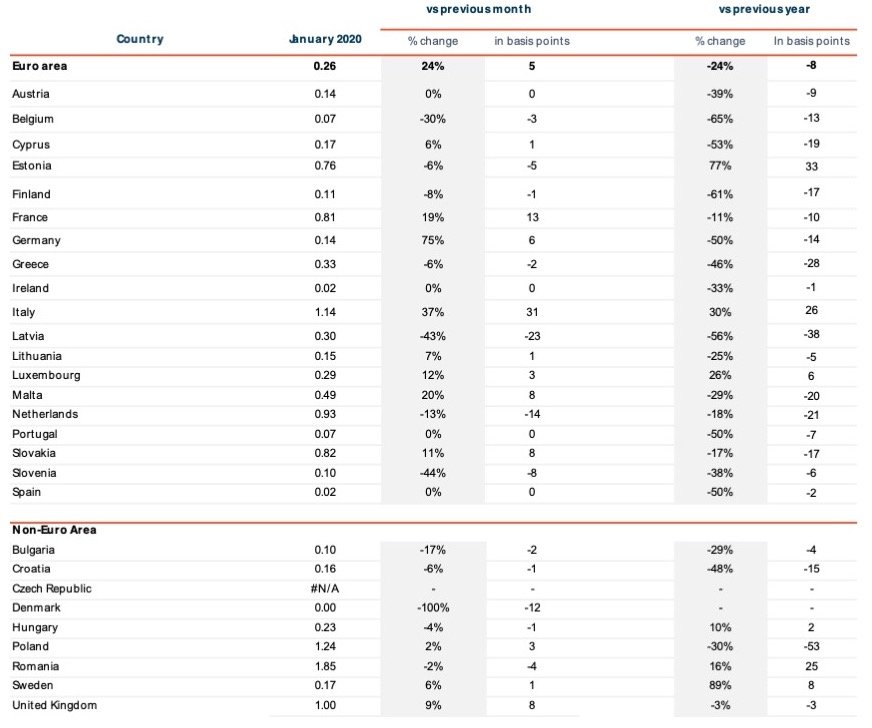 Data collected by Raisin at the end of March for 9 Eurozone markets and 6 non-Eurozone markets indicates even stronger increase of close to 25% in both 1- and 3-year interest rates in Germany, with both terms now averaging over 1%. It is the first time German average 1-year rates have topped 1% since July 2019.

The Netherlands, Portugal, Sweden and Poland also saw significant upward movement on both 1- and 3-year average interest rates, after all ending 2019 with stagnation or decreases.

Top rates on 1- and 3-year deposits in the UK, Ireland and Austria, on the other hand, all continued to fall into 2020, after steadily sinking in the final months of 2019. Top offers in Ireland are especially low, with a crushing 0.07% average interest on a 1-year term deposit. 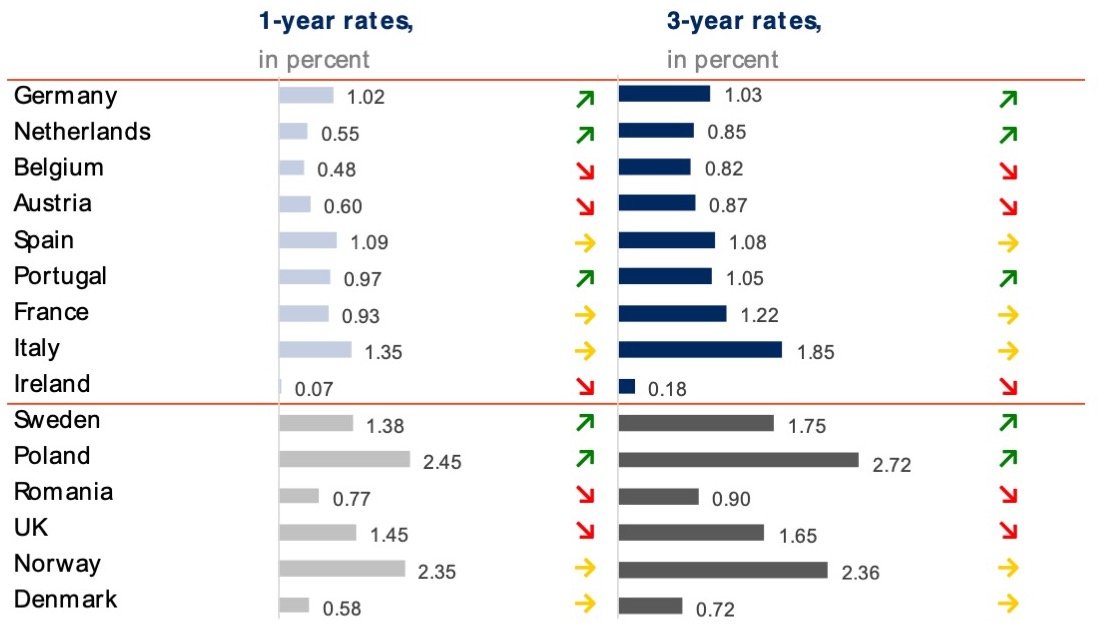 Average of the top 3 term deposit offers for retail customers based on local comparison sites as of 25/03/2020. Criteria:  EUR 10,000 deposit; 1 product per bank; offers for both new and existing clients.

Across Europe, the differences between a market’s top available offers and its biggest banks’ offers remain a striking measure of stagnant low rates at the large banks. Since the start of 2020 the significant changes have occurred in top retail offers available to consumers outside of the largest banks.

Most notably in Germany, the three biggest banks continue month after month to offer on average just 0.01% interest on a 1-year deposit. Meanwhile the average of the country’s best available offers has been much more volatile: dropping from January’s 0.88% to 0.80% in February, only to leap up to 1.02% in March.

As a result, the ratio of the biggest banks’ average rate to the averaged best offers – know in Germany as the interest rate shears or interest gap – has narrowed and then gaped back open. The top available 1-year offers are currently 175 times higher than the big banks’ deposits.*

* The top offers in our analysis exclude those available on Raisin’s platforms. 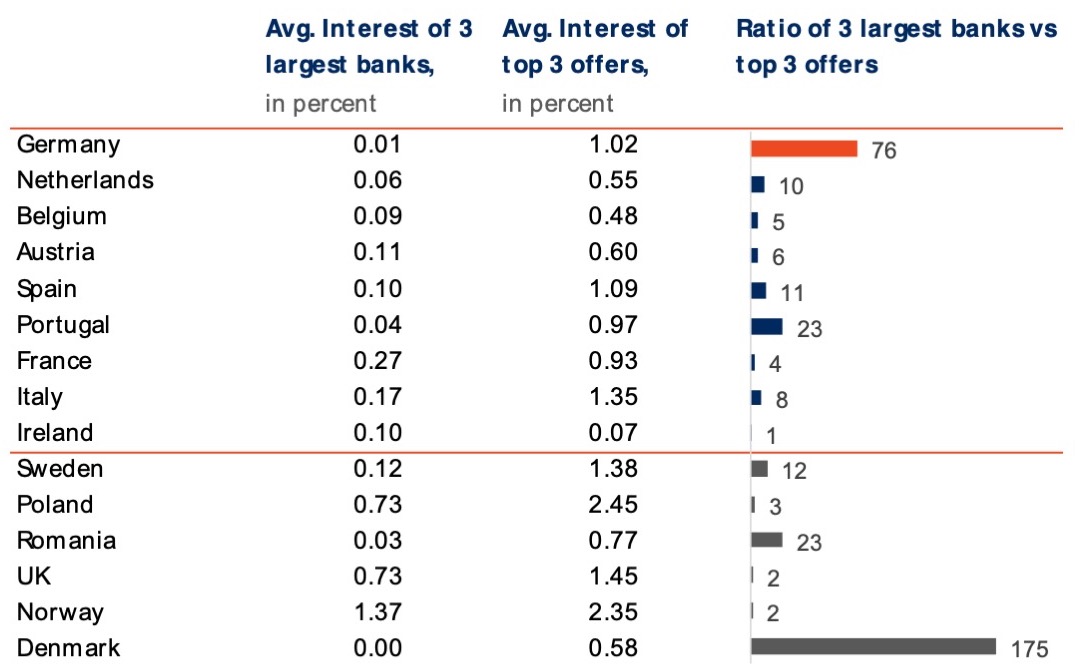 The new year saw interest rates for corporates tumble, with large decreases sweeping from Austria through Italy to France, Spain and Ireland along with several Baltic and Eastern European states.

Of Europe’s large economies only German corporate deposits experienced an echo of the increases in the retail deposit market with a small upward movement of 11 basis points. However German companies can hardly rejoice: their average interest rate on deposits of up to 1 year is still below zero.

Corporate rates in Italy and Spain meanwhile began 2020 with drops of 58 basis points, the largest decreases in Europe. For Spain this reversed several months of significant increases at the end of 2019. But for Italy the fall is a continuation of months of decline in corporate interest rates, from 0.44% in November 2019 to January 2020’s -0.20%. 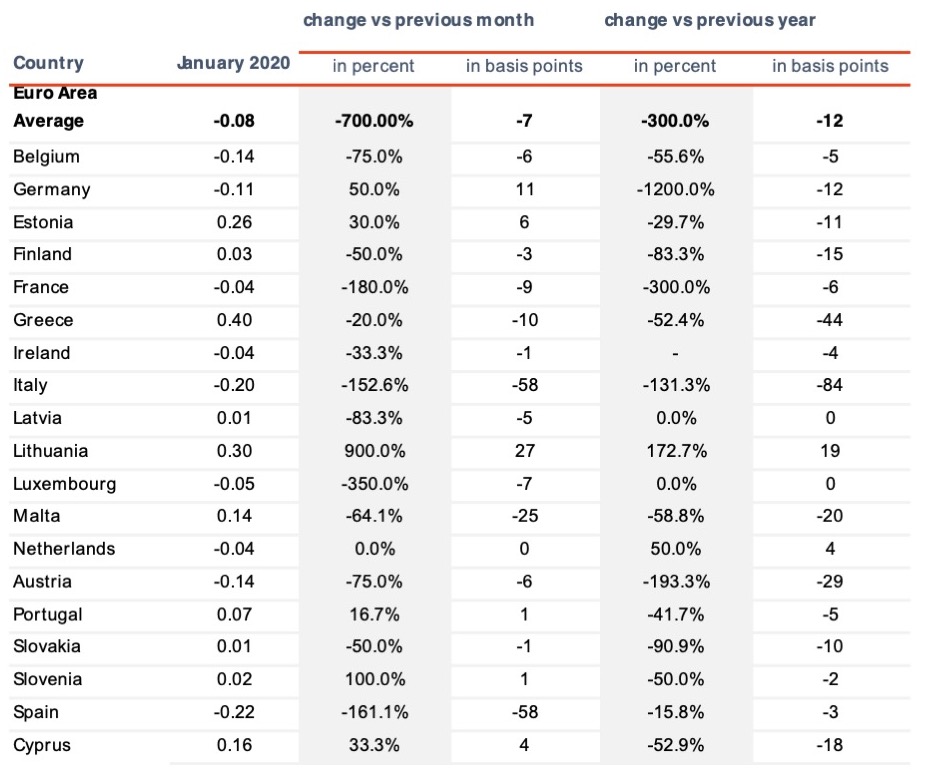 About Raisin
A trailblazer for open banking and the leading pan-European one-stop shop for online savings and investments, Berlin-based fintech Raisin was founded in 2012 by Dr. Tamaz Georgadze (CEO), Dr. Frank Freund (CFO) and Michael Stephan (COO). Raisin’s platforms — under the brand WeltSparen in the German-speaking world — are breaking down barriers to better savings for European consumers and SMEs: Raisin’s marketplace offers simple access at no charge to attractive and guaranteed deposit products from all over Europe, as well as globally diversified, cost-effective ETF portfolios and pension products (currently available in Germany). With one online registration, customers can choose from all available investments and subsequently manage their accounts. Since launch in 2013, Raisin has placed 21.5 billion EUR for more than 245,000 customers in 28+ European countries and 90 partner banks. Raisin was named to Europe’s top 5 fintechs by the renowned FinTech50 awards and is backed by prestigious European and American investors such as btov Ventures, Goldman Sachs, PayPal Ventures, Thrive Capital, Index Ventures, Orange Digital Ventures and Ribbit Capital. Raisin UK in Manchester, banking-as-a-service provider Raisin Bank in Frankfurt, pensions specialist fairr, and Raisin Technology (formerly Choice Financial Solutions) all belong to Raisin.