In her first speech as new President of the ECB, Christine Lagarde put pressure on surplus economies like Germany and the Netherlands to spend more, while also promoting the EU’s economic potential in the digital space, and pointing toward a new balance of priorities for Europe on trade.

Meanwhile the European Banking Authority has issued its annual report, including concerns about increasing pressure on banks and the impact long-term low rates will have. From their summary: “With an increasing number of banks charging or planning to charge negative interest rates to corporate and household deposits, the effects of such measures on the deposit base remain to be seen.”

Lagarde additionally recommended taking on climate change as a core strategic issue for ECB to evaluate and act on going forward: this appears to mean pushing something similar to the divestment movement, urging the financial sector to decrease and ultimately stop funding carbon-burning projects.

However needed her proposed strategic re-evaluation may be, it could expose deeper, ideological obstacles the ECB faces with regard to its very mission: to insure the stability of the Euro.

With few exceptions, retail interest rates decreased yet further in markets all across Europe. The only exceptions were big jumps up in several smaller markets, Luxembourg, Latvia and Slovakia, as well as in Sweden. Of the 28 countries we compare here, 17 feature average rates on a 1-year term deposit of under 0.5%, with 7 more countries’ rates at 1% or lower. 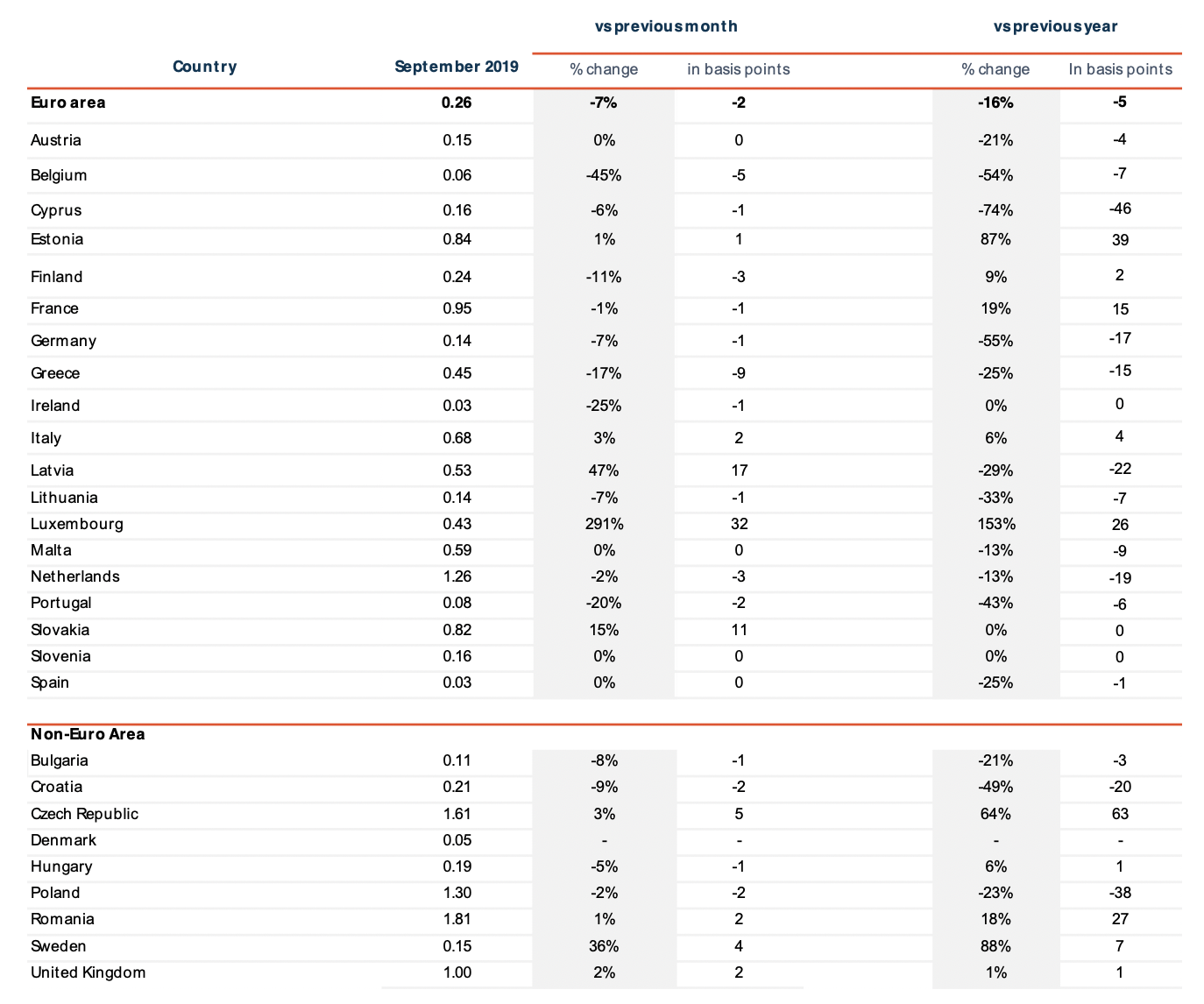 For the first time this month a German bank began charging retail savers negative rates starting at the first euro, while more than 40 other banks are penalizing depositors with negative rates from a higher minimum amount. Morgan Stanley’s Magdalena Stoklosa told the Financial Times, on the other hand, that GDP numbers as well as earnings in the banking sector have found a floor and won’t continue falling.

Spanish savers, along with the Irish, currently face, on average, the least profitable interest rates on their deposit products in all of Europe: both are averaging a 0.03% return on 1-year deposits.

From a saver’s perspective: take active steps to find best rates, or pay

The notorious German interest rate “shears” are opening again and gaping wider than ever as the largest German banks tank retail rates. The country’s three top available offers, averaged, are an astonishing 58 times higher than the average of the three biggest banks. If they don’t want to lose money on their savings, retail depositors would have to move money away from the big banks, where interest rates are lowest.

The UK’s ratio — of offers from the three largest banks to best available offers — looks at first glance much less dramatic. However, with a difference of nearly an entire percent (from a 1-year rate of 0.67% on average from the big banks to 1.63% averaged top offers), UK savers are at least as impacted as Germany’s. 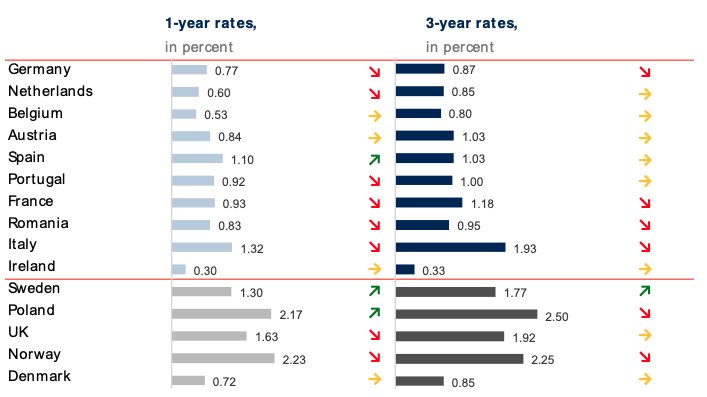 Average of the top 3 term deposit offers for retail customers based on local comparison sites as of 03/12/2019. Criteria:  EUR 10,000 deposit; 1 product per bank; offers for both new and existing clients.

Likewise in Spain, the ratio is “only” an 11-fold difference, but Spanish retail consumers stand to lose an entire percent on their interest rate by staying with the three biggest banks. The onus is squarely on depositors in these markets to search actively for ways to beat inflation and get a return on their savings.

Dutch broker bank Binckbank is now offering 0% on cash holdings and wealth management banks like InsingerGilissen are even planning for the first time to pass on negative rates — set to charge retail customers as much as -0.35% on their cash holdings in the new year. Retail investors in the Netherlands are facing one of the more painful, and least profitable, prospects in Europe. 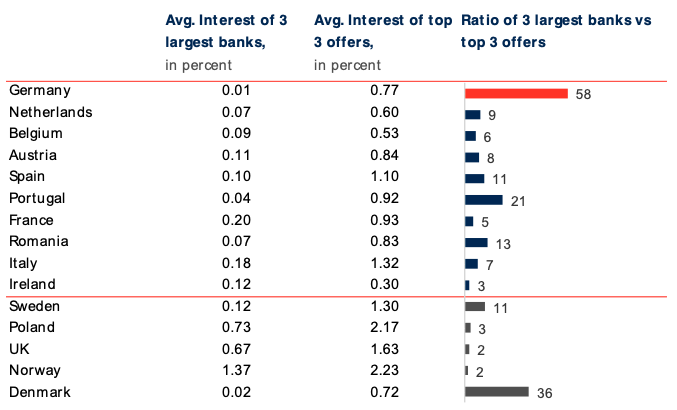 Businesses in two of Europe’s three largest economies, Germany and France, as well as in Belgium and several Baltic states, faced sharply deteriorating rates on their deposits.

Spain and Austria, on the other hand, leapt upward — at least at first glance — but only to -0.06% and 0.02% respectively. Fifteen of the 19 Euro area countries we examined ECB data for are stuck under 0.2%.

Just Italy, Greece, and Malta have corporate interest rates over half a percent (and at that, not enough to beat inflation). 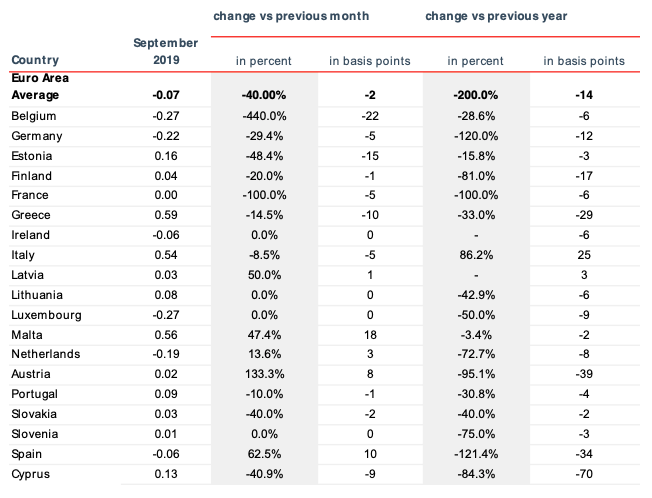 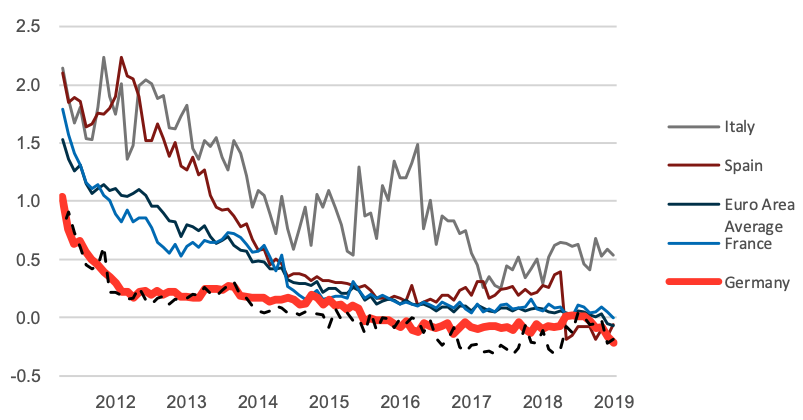 About Raisin
A trailblazer for open banking and the leading pan-European one-stop shop for online savings and investments, Berlin-based fintech Raisin was founded in 2012 by Dr. Tamaz Georgadze (CEO), Dr. Frank Freund (CFO) and Michael Stephan (COO). Raisin’s platforms — under the brand WeltSparen in the German-speaking world — are breaking down barriers to better savings for European consumers and SMEs: Raisin’s marketplace offers simple access at no charge to attractive and guaranteed deposit products from all over Europe, as well as globally diversified, cost-effective ETF portfolios and pension products (currently available in Germany). With one online registration, customers can choose from all available investments and subsequently manage their accounts. Since launch in 2013, Raisin has brokered 18 billion EUR for more than 225,000 customers in 28+ European countries and 88 partner banks. Raisin was named to Europe’s top 5 fintechs by the renowned FinTech50 awards and is backed by prestigious European and American investors such as btov Ventures, Goldman Sachs, PayPal Ventures, Thrive Capital, Index Ventures, Orange Digital Ventures and Ribbit Capital. Raisin UK in Manchester, banking-as-a-service provider Raisin Bank in Frankfurt and pensions specialist fairr all belong to Raisin.