As we approach the upcoming March 12th announcement on rates and policy from the European Central Bank, global concerns about the spread of Covid-19, “the Coronavirus,” dominate economic headlines. Traders looking for safety amid panicky stock markets are turning to bonds around the world, while Europe worries how a potential pandemic could damage already stagnating economies. The impact of virus-related disruptions to supply chains is expected to become more discernible over the coming weeks.

The most recent European Central Bank data from markets across Europe reveals that, through 2019, only Estonia, Luxembourg and Slovenia escaped the year-long collapse of retail interest rates. Although Italy also saw an upward jump of 22 basis points in its average 1-year retail rate in the last month of 2019, it was still 3 basis points shy of its previous year’s level.

One-year retail interest rates in Germany, France, and the Netherlands all fell between 10 and 18 basis points between November and December of last year. Likewise Spain and Ireland sank marginally, keeping both markets at the lowest level in Europe with a 0.02% average interest rate for a 1-year term deposit.

Outside the Eurozone, both Poland and Croatia saw big interest rate drops, of 62 and 21 basis points respectively, throughout 2019. The United Kingdom also lost ground in the last month of 2019, falling 14 basis points in one month, with a drop of 10 basis points over the entire course of 2019. The other non-Euro countries fared no better than Euro countries, with all but Sweden seeing falling or stagnating rates.

Measured purely against projected 2020 inflation rates (1.38% on average in the Eurozone and 1.69% on average outside), the average European depositor with average 1-year term deposit interest rates is losing money on their savings. 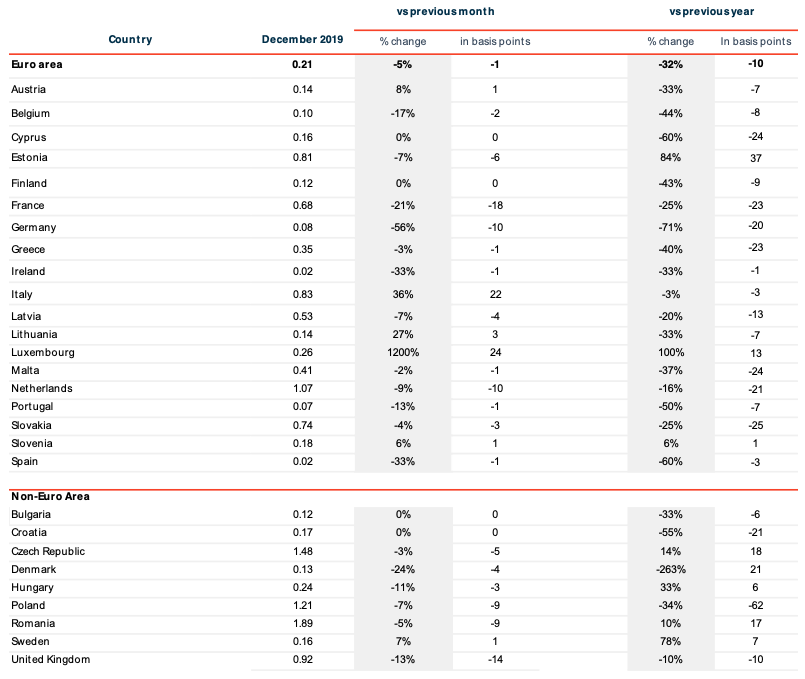 Ireland, where rates are already rock bottom, sank even lower, so that top available rates are only two hundredths of a percent higher than the big banks’ average. 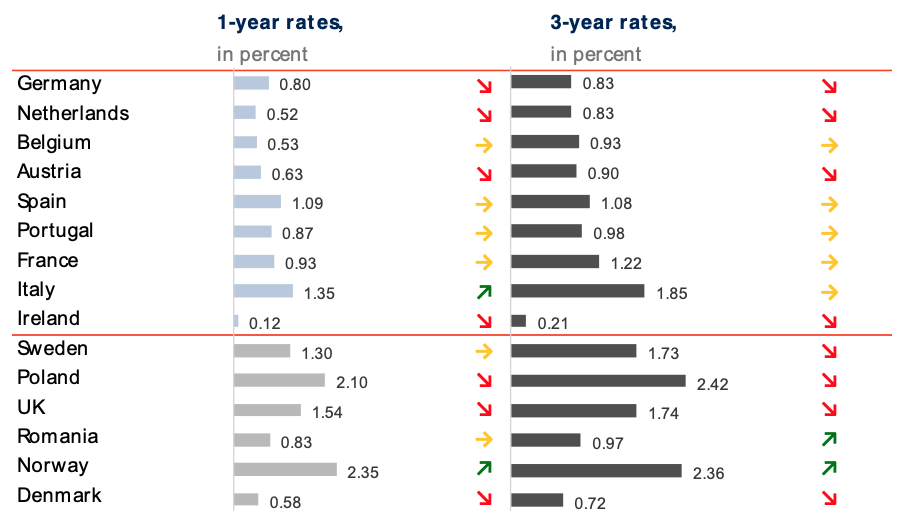 Average of the top 3 term deposit offers for retail customers based on local comparison sites as of 17/02/2020. Criteria:  EUR 10,000 deposit; 1 product per bank; offers for both new and existing clients.

If smaller or foreign banks step in where big banks feature low rates, consumers have to choose – but at least they have a choice

With a collapse to ca. 0% in the biggest three banks’ rate in Denmark, the differential of the largest Danish banks’ offers to the market’s best available offers has shot up to 175. This makes even Germany’s infamous interest rate gap look undramatic. Germany meanwhile closed its interest rate “shears” slightly from last month’s ratio of 66, with best offers now 60 times higher than those of Germany’s biggest banks.

In Ireland, the UK and Norway, the gap between big banks and the markets’ top offers is not as extreme. In the UK, this points to the relatively strong rates offered by the biggest banks. In Ireland, however, this narrow gap signifies the poor choice of interest rates available to Irish consumers across the board.*

* The top offers in our analysis exclude those available on Raisin’s platforms. 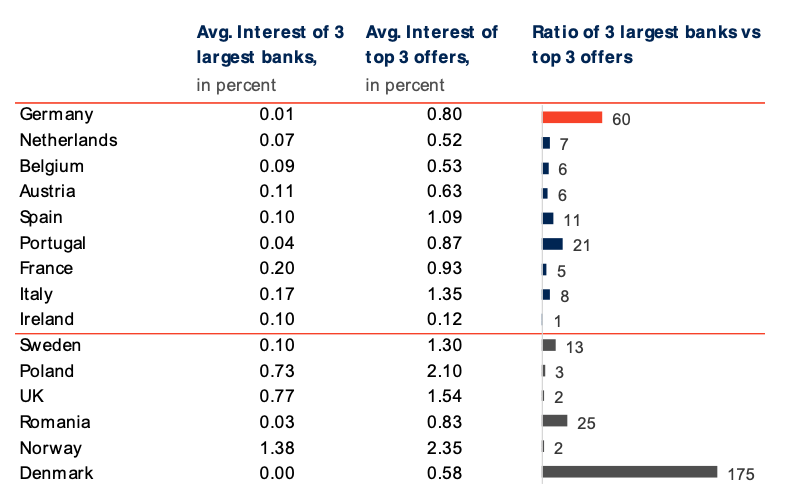 With Germany, Austria, the Netherlands, Belgium and Ireland all featuring on average negative interest rates for corporate deposits, and another eight countries under 0.1%, European businesses are broadly being punished for their cash on hand.

Only in Spain, Italy, Malta and Greece, all between 0.38% and 0.5%, are corporate deposits escaping the worst penalties, but even they are still nowhere close to beating inflation. 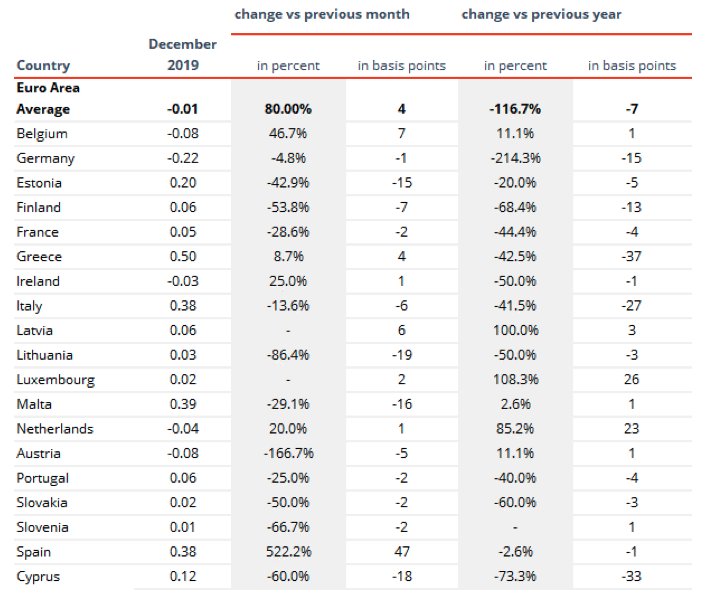 About Raisin
A trailblazer for open banking and the leading pan-European one-stop shop for online savings and investments, Berlin-based fintech Raisin was founded in 2012 by Dr. Tamaz Georgadze (CEO), Dr. Frank Freund (CFO) and Michael Stephan (COO). Raisin’s platforms — under the brand WeltSparen in the German-speaking world — are breaking down barriers to better savings for European consumers and SMEs: Raisin’s marketplace offers simple access at no charge to attractive and guaranteed deposit products from all over Europe, as well as globally diversified, cost-effective ETF portfolios and pension products (currently available in Germany). With one online registration, customers can choose from all available investments and subsequently manage their accounts. Since launch in 2013, Raisin has placed 20.5 billion EUR for more than 235,000 customers in 28+ European countries and 90 partner banks. Raisin was named to Europe’s top 5 fintechs by the renowned FinTech50 awards and is backed by prestigious European and American investors such as btov Ventures, Goldman Sachs, PayPal Ventures, Thrive Capital, Index Ventures, Orange Digital Ventures and Ribbit Capital. Raisin UK in Manchester, banking-as-a-service provider Raisin Bank in Frankfurt, pensions specialist fairr, and Raisin Technology (formerly Choice Financial Solutions) all belong to Raisin.