Angela Merkel’s late-breaking proposal to join Macron in supporting some form of Eurobonds to support the Eurozone’s hardest hit countries, puts her in line for the moment with the European Central Bank’s determinedly pro-Euro stance. Thus the EU and Eurozone appear to have received the boost they need to recover economically from the pandemic. The ECB warns that the path forward will nonetheless offer enormous challenges.

The Consumer Confidence Index plunged across Europe over the last several months while savings rates went up sharply as consumers cut their spending in light of the uncertainty due to the pandemic. The European overall inflation rate has also dropped significantly to 0.1%, the lowest level since the summer of 2016, from 1.4% in January 2020.

Pandemic fails to put a dent in interest rate decline

Ten European markets did not move more than 1 basis point in either direction, however, including Spain, Portugal, the Netherlands and Ireland. Germany and France both slid -3 basis points. 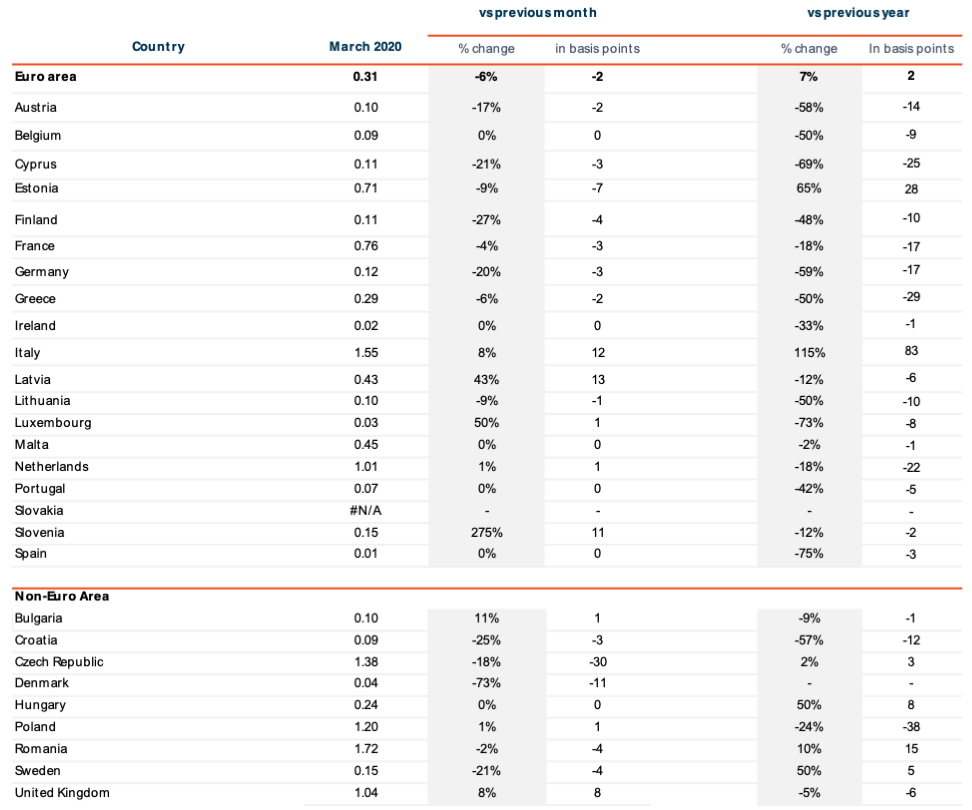 Raisin collects current intelligence on interest rates across the continent (two months ahead of the latest ECB data), which shows that the April uptick in interest rates held steady in Austria, the Netherlands, and Sweden. But the upward movement has stopped overall, with just three small increases. 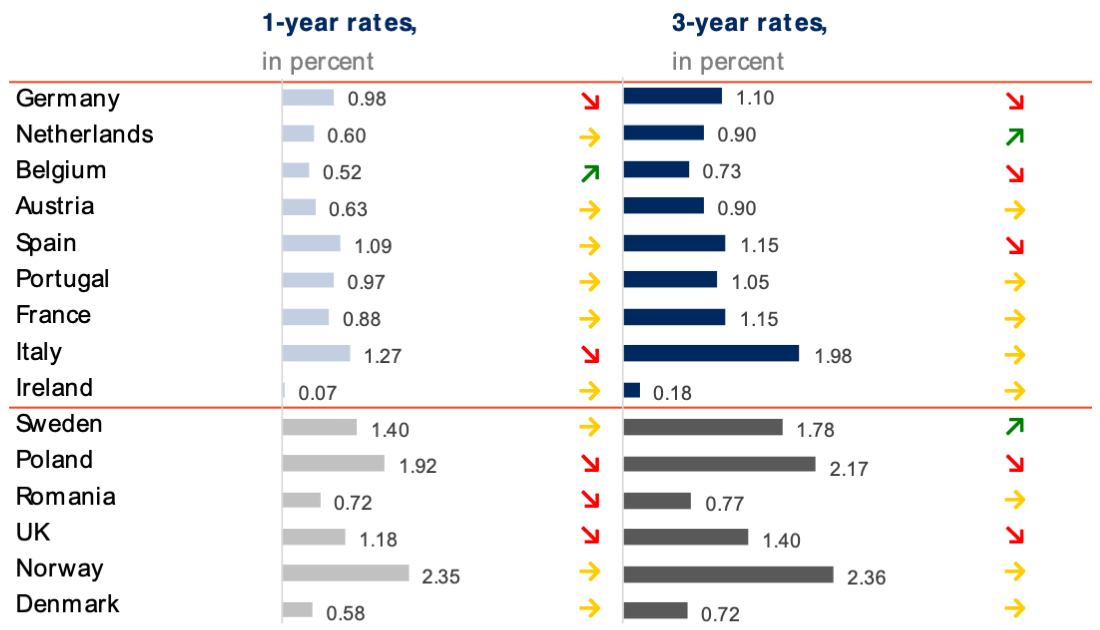 Average of the top 3 term deposit offers for retail customers based on local comparison sites as of 19/05/2020. Criteria: EUR 10,000 deposit; 1 product per bank; offers for both new and existing clients.

Due to the decrease in top interest rates in Germany, April saw a small contraction of the “interest rate shears” in Germany – the gap between the extremely low rates available from the country’s largest banks and the top available offers. Otherwise though there was almost no movement across Europe narrowing or widening the disparity between big banks and best offers. 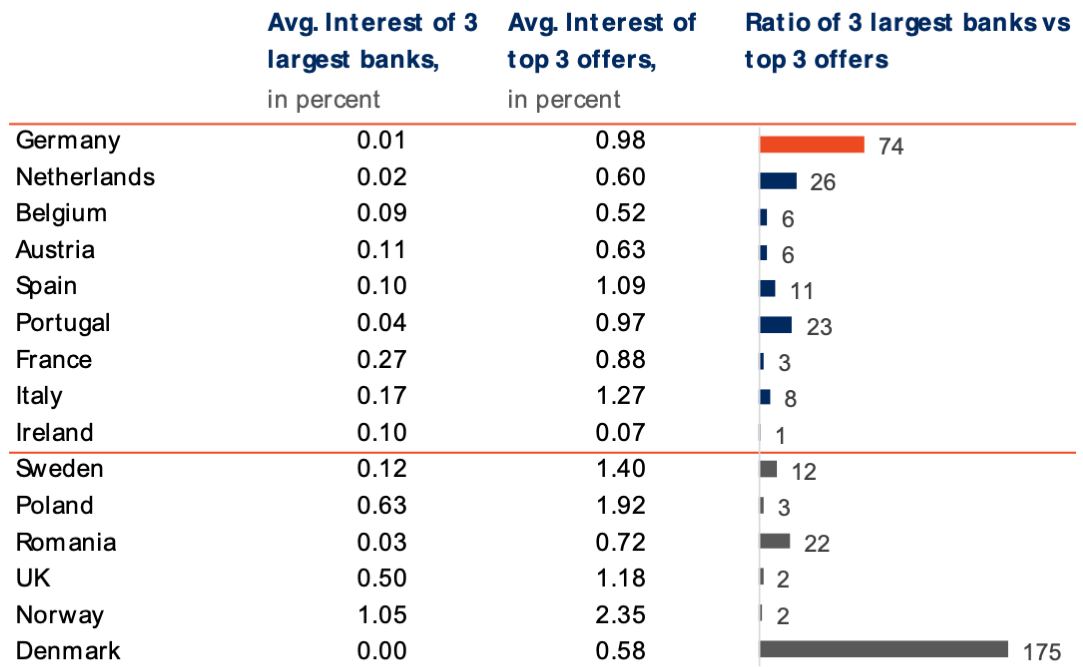 The Eurozone average interest rates on corporate deposits slipped to -0.09%, with Finland dropping -27 basis points to -0.02% and Estonia and Austria -14 and -6 basis points respectively.

Germany, Austria, the Netherlands and Ireland, meanwhile, all descended further below zero, meaning corporates are paying ever more for the privilege of depositing their cash with banks. 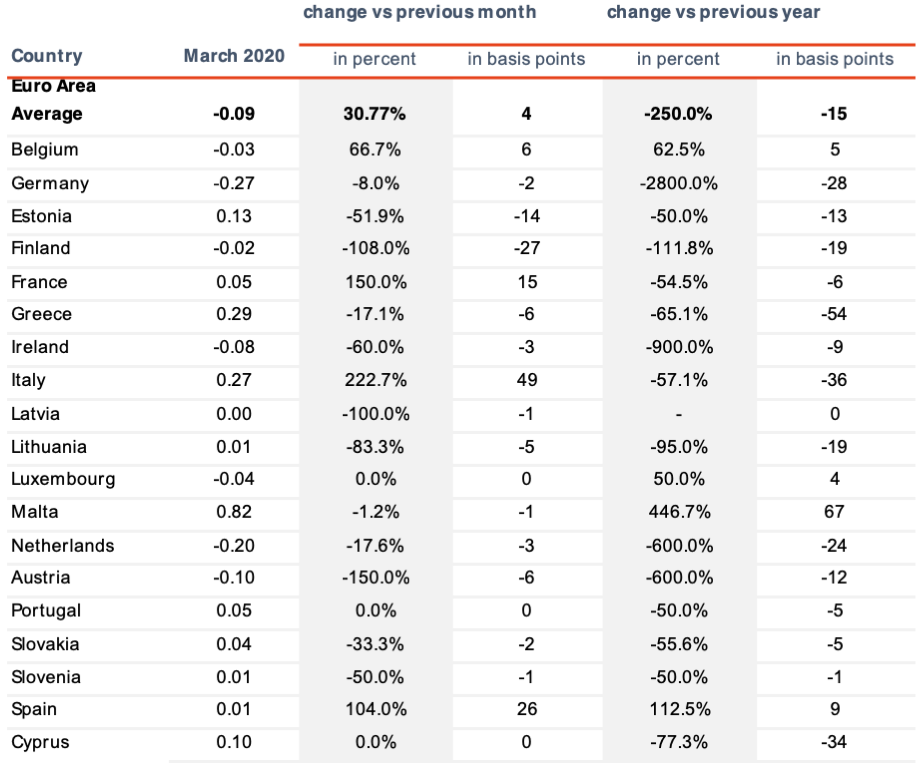 Header image: by j on Unsplash

About Raisin
A trailblazer for open banking and the leading pan-European one-stop shop for online savings and investments, Berlin-based fintech Raisin was founded in 2012 by Dr. Tamaz Georgadze (CEO), Dr. Frank Freund (CFO) and Michael Stephan (COO). Raisin’s platforms — under the brand WeltSparen in the German-speaking world — are breaking down barriers to better savings for European consumers and SMEs: Raisin’s marketplace offers simple access at no charge to attractive and guaranteed deposit products from all over Europe, as well as globally diversified, cost-effective ETF portfolios and pension products (currently available in Germany). With one online registration, customers can choose from all available investments and subsequently manage their accounts. Since launch in 2013, Raisin has placed 23 billion EUR for more than 260,000 customers in 28+ European countries and 92 partner banks. Raisin was named to Europe’s top 5 fintechs by the renowned FinTech50 awards and is backed by prestigious European and American investors such as btov Ventures, Goldman Sachs, PayPal Ventures, Thrive Capital, Index Ventures, Orange Digital Ventures and Ribbit Capital. Raisin UK in Manchester, banking-as-a-service provider Raisin Bank in Frankfurt, pensions specialist fairr, and Raisin Technology (formerly Choice Financial Solutions) all belong to Raisin.