Raisin interest rate analysis: Cash is king – and smaller banks are raising rates to attract it

European banks appear to be much better prepared for the current economic crisis, caused by the global coronavirus pandemic and subsequent lockdowns to get it under control, than they were for the last crisis in 2009 and 2010. Capital markets and investment banks are facing a lot more uncertainty.

Raisin has researched the top interest rates on 1- and 3-year deposits in nine Eurozone countries and six non-Eurozone ones. According to the newest data, Germany’s top rates have risen by more than a third since mid-February, now up to 1.05% on average for top 1-year deposits and 1.14% for 3-year deposits, according to Raisin’s own research. Top rates in the Netherlands have also ticked upward since the start of 2020, if less dramatically.

Meanwhile after months of stasis, both Spain and Italy have experienced a change, possibly reflecting the devastating impact of the pandemic on each country’s economy. Spain and Italy’s average top 3-year rates have both moved upward.

Raisin platforms in Germany, Spain, the Netherlands and elsewhere have registered an upward trend across Europe, as 31 of the fintech’s partner banks have increased interest rates since the beginning of march.. 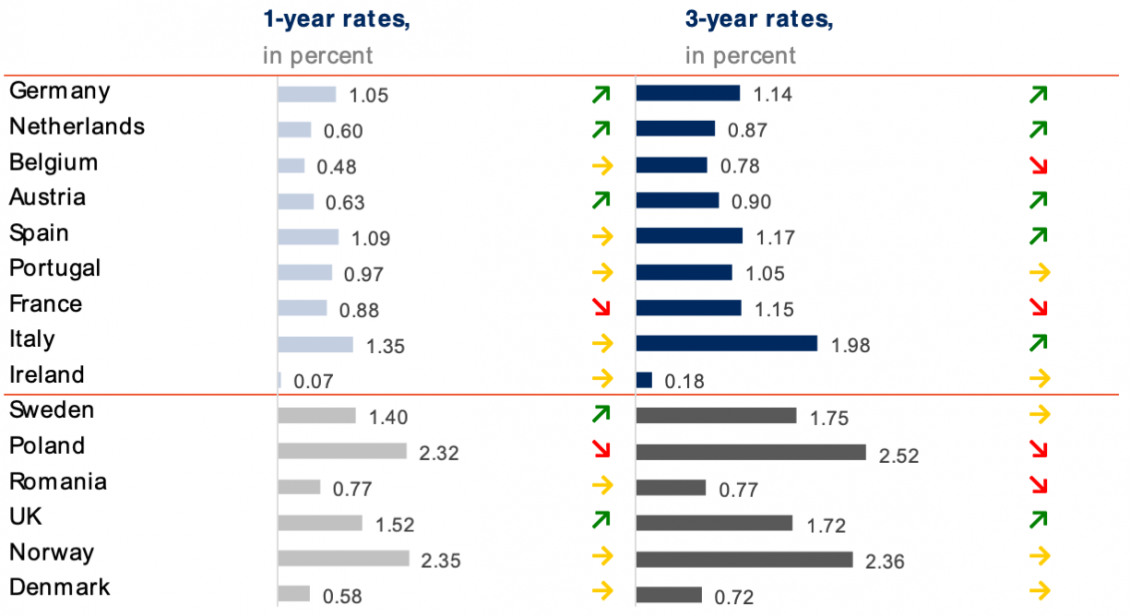 Average of the top 3 term deposit offers for retail customers based on local comparison sites as of 21/04/2020. Criteria: EUR 10,000 deposit; 1 product per bank; offers for both new and existing clients.

Within the Eurozone Germany continues to experience a massive divide: between the 0.01% depositors get at the largest three German banks, on the one hand, and an average of 1.05% from top available offers, on the other. The precise ratio has more than doubled in the last 6 months. Outside the Eurozone Denmark shares a similarly dramatic “interest rate gap” with top banks offering ca. 0% on 1-year retail deposits and top available offers averaging 0.58%.

As long as rates are so low, however, the ratio itself remains deceptive: in fact, nearly every European country currently sees a significant difference between the rates their largest banks are able to offer customers and the best interest rates available in those countries outside the big banks.

Ireland’s largest three banks are beating the market’s top offers , though both the big banks and the top offers are stuck at or under 0.10%. 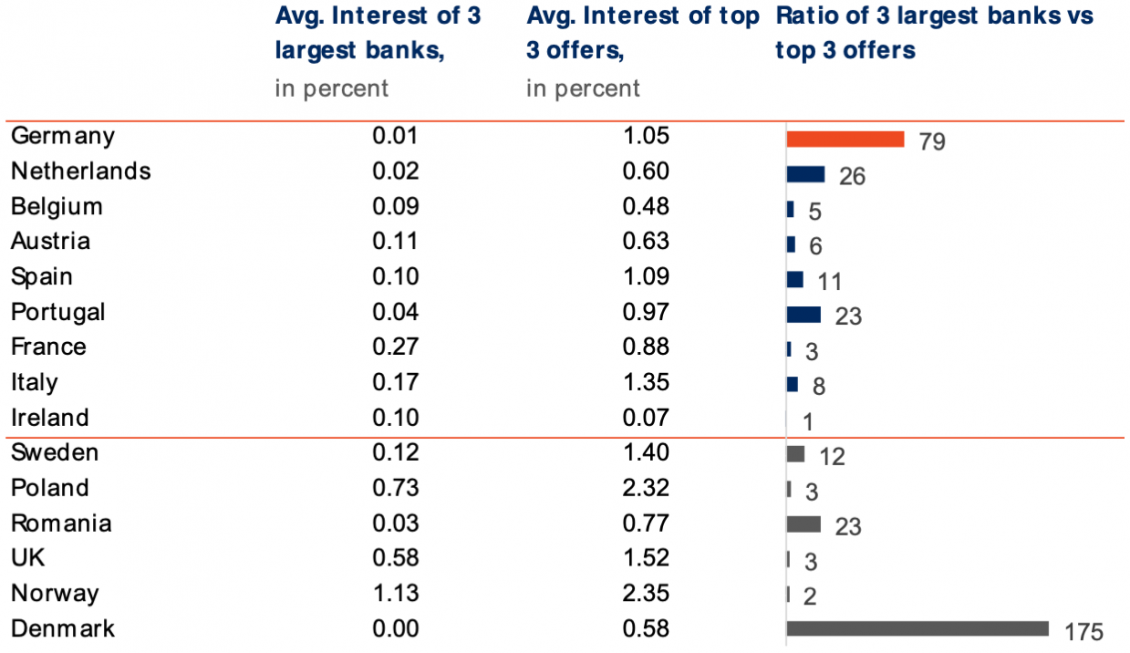 Despite widespread drops in retail interest rates across Europe between January and February, the European Central Bank’s latest data shows Italy pushing the Eurozone’s average rate upward. With Italy up 28 basis points from last month the country’s average interest rate on deposits up to 1-year is now at 1.42%, the only market in the Eurozone over 1%.

Five Eurozone countries currently average under a tenth of a percent interest on the deposit up to 1-year, with another nine countries under half a percent.

Germany, with its average at 0.15%, continues an upward trend, while Spain, France, and the UK slip -1, -2, and -4 basis points respectively. Spain’s average rate of 0.01% has now bypassed Ireland’s on its downward trend to become the lowest average in Europe of all the countries in the ECB’s data. 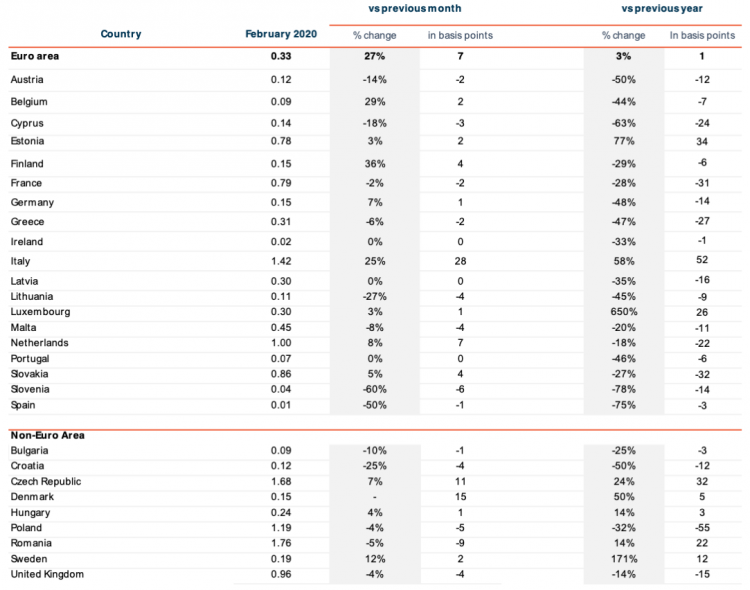 CORPORATE RATES:
No relief for corporates in European deposit market

The Eurozone average for corporate interest rates began 2020 with a drop of  -7 basis points only to sink -5 basis points further in February, according to the latest European Central Bank data.

Across all of Western Europe corporates on average are paying for their deposits, with rates at below zero, except Portugal where the average corporate deposit yield is still just 0.05%. Germany has not seen the same uptick  in corporate deposits that the country’s average retail deposits experienced. Both Germany and Spain now average the lowest in the Eurozone at -0.25% on business deposits. Italy with -0.23% and the Netherlands at -0.17% are not far above them. 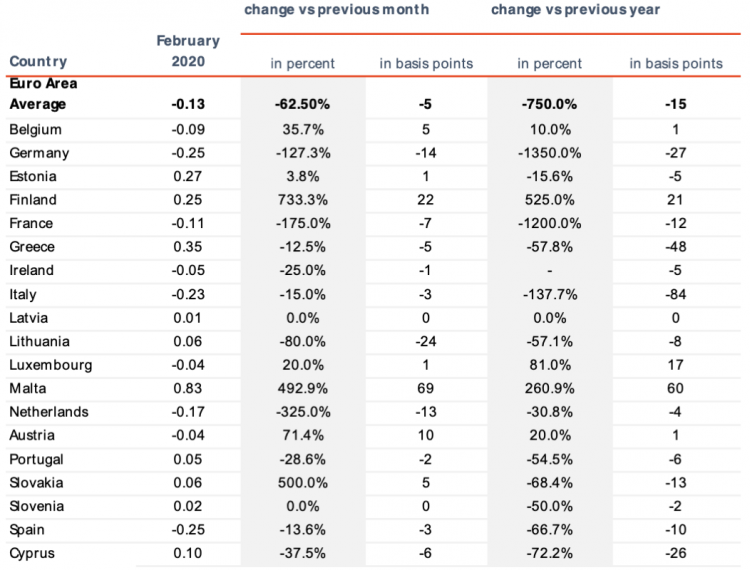 About Raisin
A trailblazer for open banking and the leading pan-European one-stop shop for online savings and investments, Berlin-based fintech Raisin was founded in 2012 by Dr. Tamaz Georgadze (CEO), Dr. Frank Freund (CFO) and Michael Stephan (COO). Raisin’s platforms — under the brand WeltSparen in the German-speaking world — are breaking down barriers to better savings for European consumers and SMEs: Raisin’s marketplace offers simple access at no charge to attractive and guaranteed deposit products from all over Europe, as well as globally diversified, cost-effective ETF portfolios and pension products (currently available in Germany). With one online registration, customers can choose from all available investments and subsequently manage their accounts. Since launch in 2013, Raisin has placed 22 billion EUR for more than 250,000 customers in 28+ European countries and 91 partner banks. Raisin was named to Europe’s top 5 fintechs by the renowned FinTech50 awards and is backed by prestigious European and American investors such as btov Ventures, Goldman Sachs, PayPal Ventures, Thrive Capital, Index Ventures, Orange Digital Ventures and Ribbit Capital. Raisin UK in Manchester, banking-as-a-service provider Raisin Bank in Frankfurt, pensions specialist fairr, and Raisin Technology (formerly Choice Financial Solutions) all belong to Raisin.