Continuing uncertainty on world trade is raising serious questions for manufacturing economies like Germany’s, as well as for everyone facing tariffs, potentially spurring changes to trade routes and relationships alike. Between Brexit, the trade war and a change of guard at the ECB, European businesses and economic analysts have to follow a faster moving ball in a game whose rules are changing while they play.

Outgoing ECB President Mario Draghi exits with a last call for European governments to stimulate the economy through spending. Germany remains resistant, however, despite its considerable surplus (and broad infrastructure needs). Whatever potential impact a German stimulus would have beyond Germany may be debatable in any case.

Developments on the status of Brexit emerged seemingly hour by hour in recent weeks, though the U.K. will now receive a delay and not leave the European Union by the previous 31. October 2019 deadline. How Europe — and the especially hard-hit German manufacturing sector — will resist the downward pressure coming from global trade tension generated by Trump’s tariff wars, also remains to be seen.

A new German Director has been nominated to the ECB, economist and professor Isabel Schnabel, who has thus far argued for Draghi’s policies and looks likely to gain incoming President Lagarde’s trust, advocating for a continuance of low rates. The ECB isn’t alone however, as the president of the European Banking Federation Jean Pierre Mustier (also head of the Italian bank UniCredit) noted in a recent interview with the Financial Times. The financial industry can enact its own changes: the industry, he suggested, should leave off protesting penalty interest and, instead, use the opportunity to self-reflect and address needed transformations to their own business models.

Raisin CEO and co-founder Dr. Tamaz Georgadze agreed: “Despite the criticism regarding persistent negative rates, Draghi did a great deal to preserve the Euro. As far as yields are concerned, we’re all interested in what the ECB’s change in leadership will mean for interest rate policy. Christine Lagarde has a big task ahead, together with business and state leadership, in finding a good balance between yields on deposits and economic stimulation.” 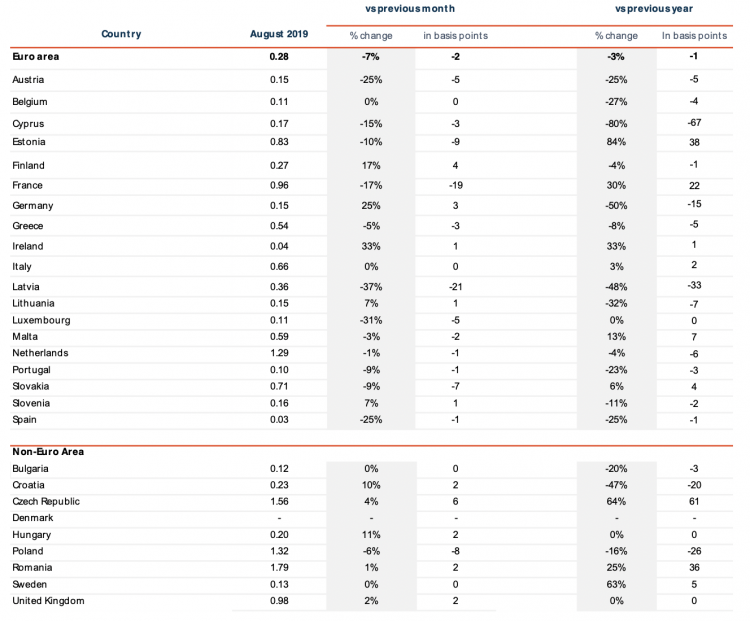 One-year rates across European markets inside and outside the Euro-zone nearly all hovered at their recent lows or sank slightly. Exceptions were Germany and Ireland, where retail rates jumped 25% and 33% respectively (losses of 3 and 1 basis points), leaving them with only 0.15% and 0.04% interest for 1-year deposits on average.

The lack of movement does not preclude a large spread of rates across the European Economic Area: within the Euro zone alone, the highest rate is 43 times higher than the lowest, and if you include all the EEA countries, the differential is almost 60.

The average of each country’s top 3 rates demonstrates large gaps between deposit markets on average and top available rates: for instance Spain’s top rates are 36 times higher than its market-wide average.

While Ireland’s top rates are nearly 10 times higher than the country’s market-wide average, those highs remain painfully low, at 0.3% on 1-year offers and just 0.33% on 3-year deposits. 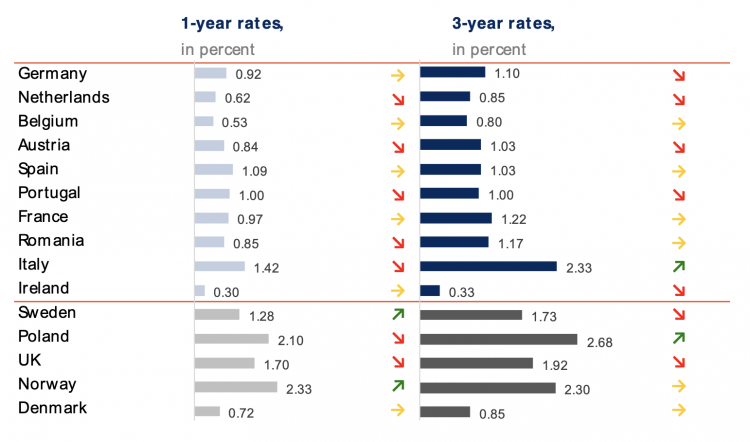 Average of the top 3 term deposit offers for retail customers based on local comparison sites as of 27/09/2019. Criteria:  EUR 10,000 deposit; 1 product per bank; offers for both new and existing clients.

Between August and September, when we collected this comparison data, however, Germany’s interest rate “sheers” have been reduced by two thirds: the average interest rate of Germany’s 3 largest banks increased marginally from 0.03 to 0.08 but it’s enough to bring the differential between the banks’ rate and the much higher top available offers from 35 times higher to 12 times higher. Unfortunately for most savers, the apparent closing of the gap still leaves them with staggeringly low rates.

Only Portugal saw change, of the other EEA countries we compared, with the largest banks’ average rate almost halving from 0.07% to 0.04%, while Portugal’s top offers also fell to 1% — still 23 times higher than the big banks’ average deposit offers. 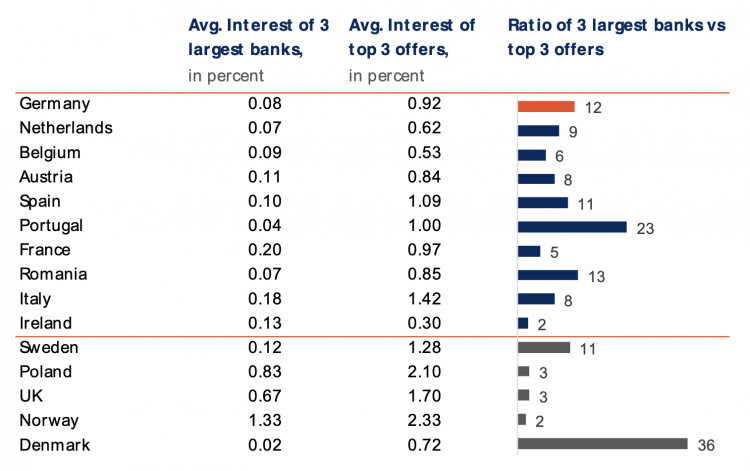 While Italian and Estonian businesses alone escaped falling rates on corporate deposits, the rest of the Euro area suffered, with an increasing number of markets facing negative rates.

Germany, Austria, Luxembourg, Spain, Ireland, Belgium and the Netherlands are all under 0% now, having taken significant hits between the ECB’s September data release and the most recent release in October. Of those countries, the first four are not just down in the most recent numbers: their major rate reductions reflect longer trends, with 130% to 1450% drops in corporate rates since last year (losses of 11 to 41 basis points). 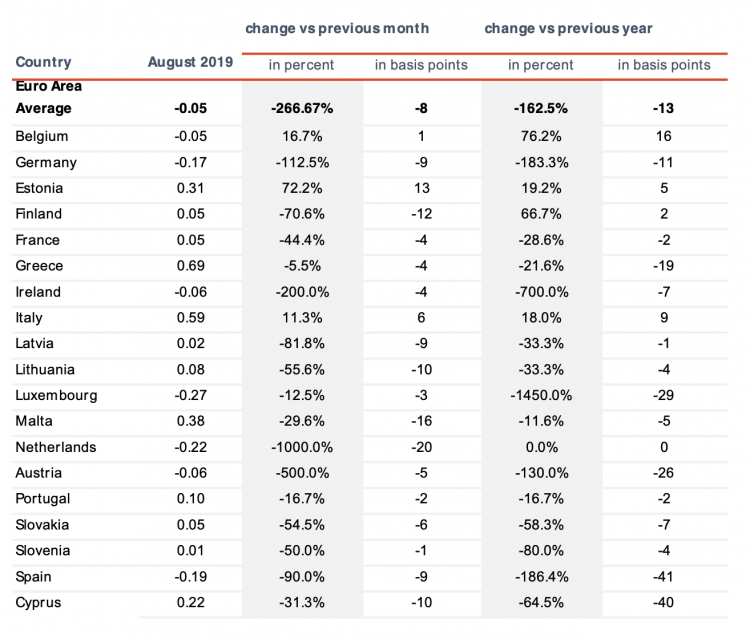 Meanwhile in 7 countries, business deposits are stuck between 0% and 0.1%, including France, Portugal, smaller Eastern European markets and several Baltic nations.

Even in what is currently the best available market, Italy, corporates are left in the red: with inflation at 0.8% in September 2019, Italy’s 0.59% average interest rate still keeps corporate deposits under water. 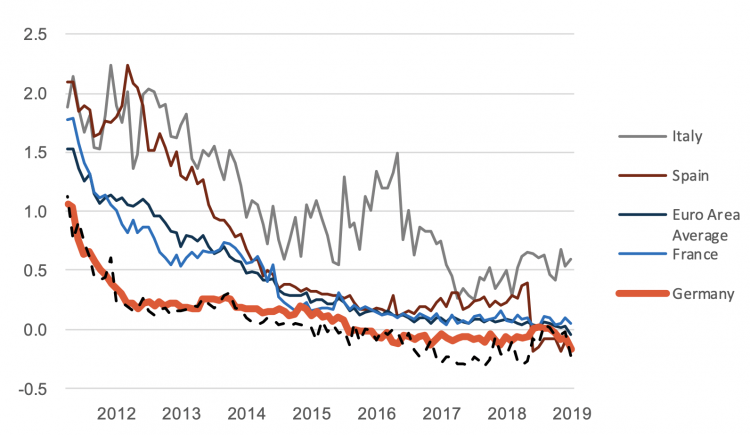 About Raisin
A trailblazer for open banking and the leading pan-European one-stop shop for online savings and investments, Berlin-based fintech Raisin was founded in 2012 by Dr. Tamaz Georgadze (CEO), Dr. Frank Freund (CFO) and Michael Stephan (COO). Raisin’s platforms — under the brand WeltSparen in the German-speaking world — are breaking down barriers to better savings for European consumers and SMEs: Raisin’s marketplace offers simple access at no charge to attractive and guaranteed deposit products from all over Europe, as well as globally diversified, cost-effective ETF portfolios and pension products (currently available in Germany). With one online registration, customers can choose from all available investments and subsequently manage their accounts. Since launch in 2013, Raisin has brokered 17 billion EUR for more than 215,000 customers in 28+ European countries and 86 partner banks. Raisin was named to Europe’s top 5 fintechs by the renowned FinTech50 awards and is backed by prestigious European and American investors such as btov Ventures, Goldman Sachs, PayPal Ventures, Thrive Capital, Index Ventures, Orange Digital Ventures and Ribbit Capital. Raisin UK in Manchester, banking-as-a-service provider Raisin Bank in Frankfurt and pensions specialist fairr all belong to Raisin.