With each new release of economic data since the start of the Covid-19 pandemic, Europe’s markets are readjusting. Europe’s largest economy, Germany, may not have sustained the degree of losses first suspected, but the longer-term outlook across the continent appears grim. The European Central Bank (ECB) has advocated for strong action to stimulate the economy, while providing banks significant relief and continuing to pursue its negative interest strategy. The ECB may follow the U.S. Federal Reserve’s new step to aim for a higher inflation level as well.

In an August 26th speech by ECB Executive Board member Isabel Schnabel, which offered an “overall positive assessment of the ECB’s experience with negative interest rates,” she placed the strategy in a broader context:

“While the ECB can mitigate potential negative effects, solutions to the underlying structural causes go beyond the remit of monetary policy. These problems include problems of overbanking and a lack of pan-European mergers, which would require the completion of the European Banking Union, as well as the advancement of the capital markets union, which have become ever more important in response to the coronavirus (COVID-19) pandemic.”

Consumers in Europe’s largest economies including Germany, Spain, and Italy continue to experience huge interest rate spreads in the deposits market. At the three largest banks in Germany savers can expect a yield on their 1-year term deposits of 0.01%, functionally paying the banks to keep their savings.

Top available offers in Germany average 0.99%, however, enabling depositors who actively seek out the most competitive products to earn up to 74 times more than big bank customers and to beat current inflation numbers.

In Italy customers of the three biggest banks likewise earn just an average of 0.17% on their 1-year term deposits whereas, moving to smaller institutions featuring Italy’s top available deposit products, they can earn up to 1.27% – the highest rate in Europe and eight times higher than the big banks’ best offers.

In Spain depositors shifting their money from 0.10% interest rates at the largest three Spanish banks can earn ten times more, up to 0.99%, with the market’s top offers.

Similarly, smaller markets like Belgium, Portugal, Austria, Sweden and Poland all continue to see top available interest rates on 1-year deposits at five to more than 20 times higher than the yields offered by the countries’ big banks. 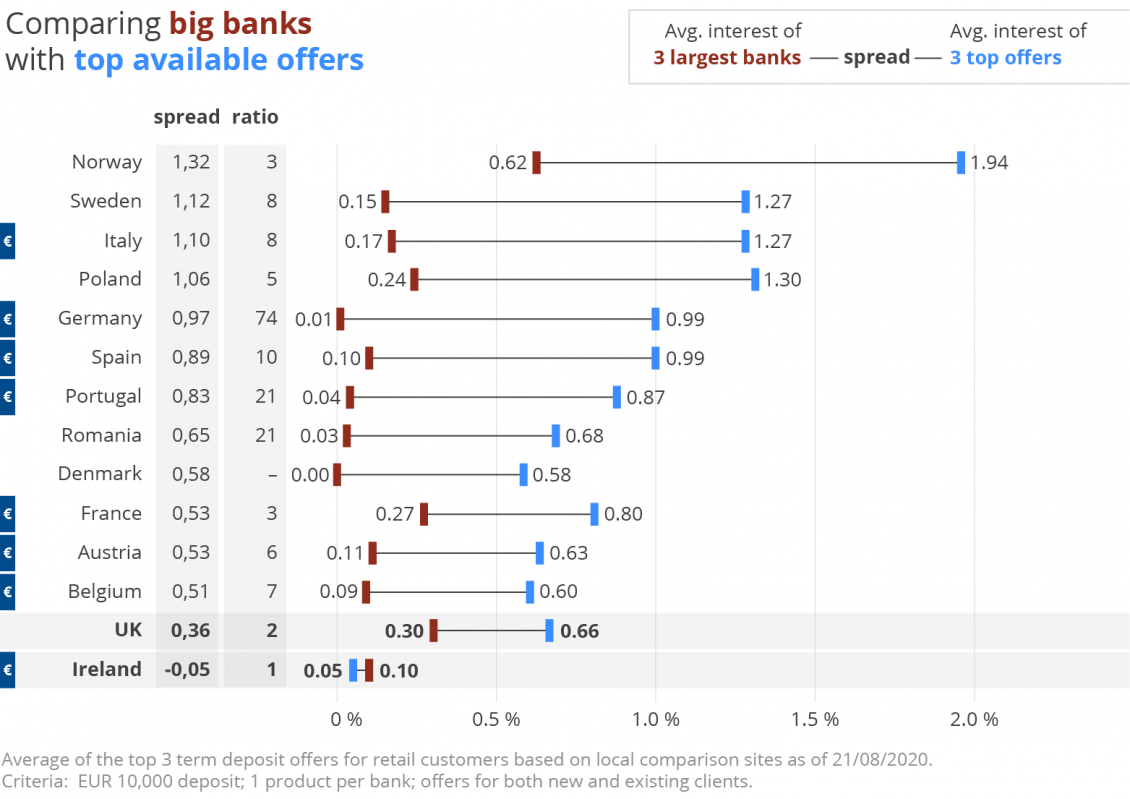 Note: we only display two decimal points. These rates are calculated excluding Raisin’s platform and, where one exists, any direct competitor in each market.

The spread between interest on 1-year and 3-year deposit offers remains narrow in much of Europe. There is a difference of less than 2 tenths of a percent between interest rates on top 1-year and top 3-year term deposits in Spain, Portugal, Belgium, and Ireland, along with Norway and Denmark in Scandinavia and in Eastern Europe Poland and Romania. 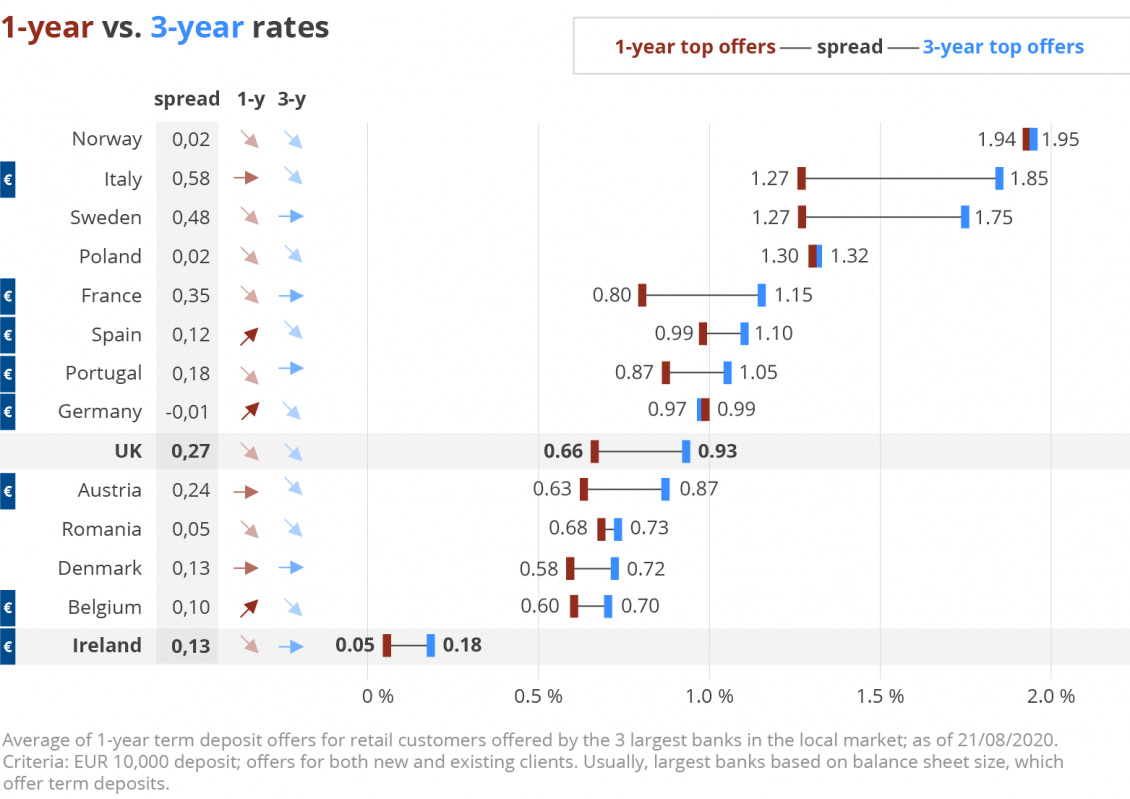 Despite sustained low rates, Europeans still have access to profitable returns on savings

With few exceptions, average interest rates on term deposits of 1-year or less are down compared to summer 2019, according to the European Central Bank’s latest data. Among the hardest hit between June 2019 and June 2020 were France, the Netherlands, and the UK, losing between 30 and 45 basis points. Greece also lost 30 basis points compared to June 2019, with interest rates in Finland (-22), Poland (-95) and the Czech Republic (-116) plunging as well.

Germany and Sweden are among the few markets that saw an increase in June 2020 relative to one year earlier, with Germany up slightly by 7 basis points and Sweden by 10.

Of the markets we analyse in and outside the Eurozone, 14 currently have average rates stuck at under 0.2%, including Germany, Ireland, and Spain. By contrast Italy, France, and the UK feature average rates well over half a percent, at 0.64%, 0.81%, and 0.69% respectively. 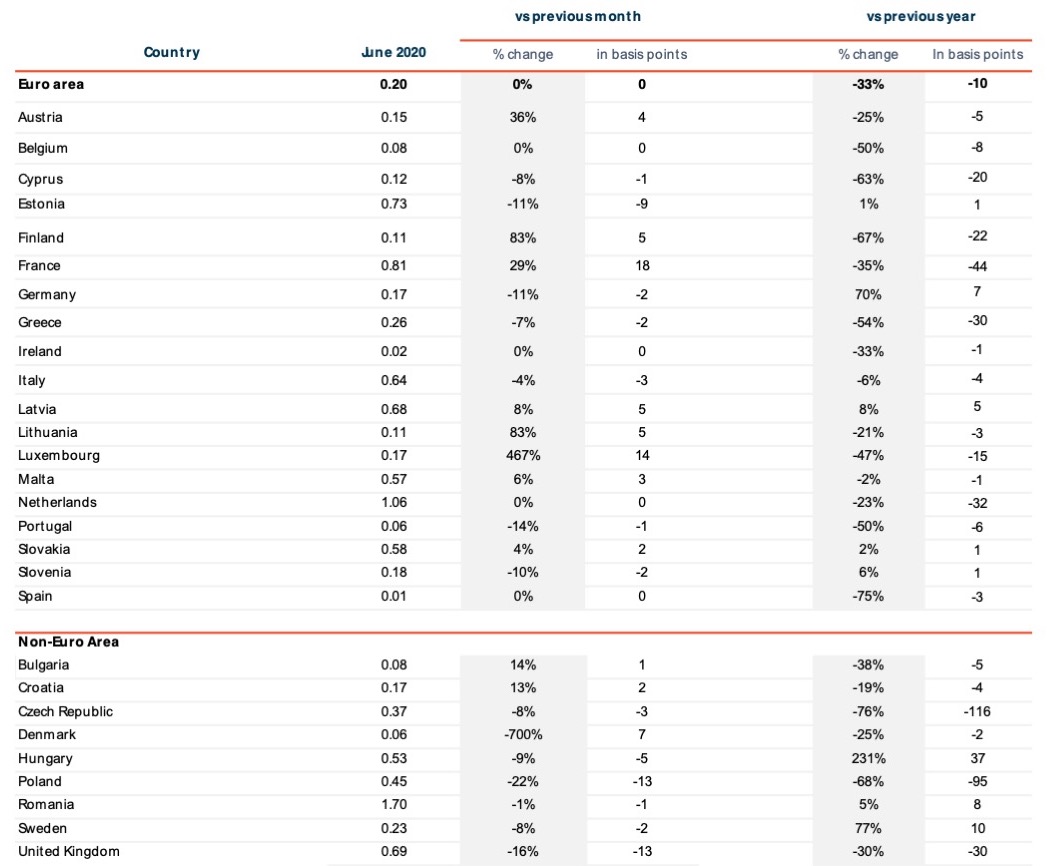 According to the European Central Bank’s latest data the Eurozone’s average interest rate on corporate deposits of 1 year or less – now at -0.14% – lost 1500% since June 2019, amounting to just 15 basis points. The Benelux markets as well as Germany, Ireland and Spain all feature on average negative interest for corporate deposits.

Between May and June, Ireland and Spain jumped 9 and 10 basis points respectively, though still below 0%, with Austria, Belgium and Luxembourg also climbing 3 to 6 basis points. 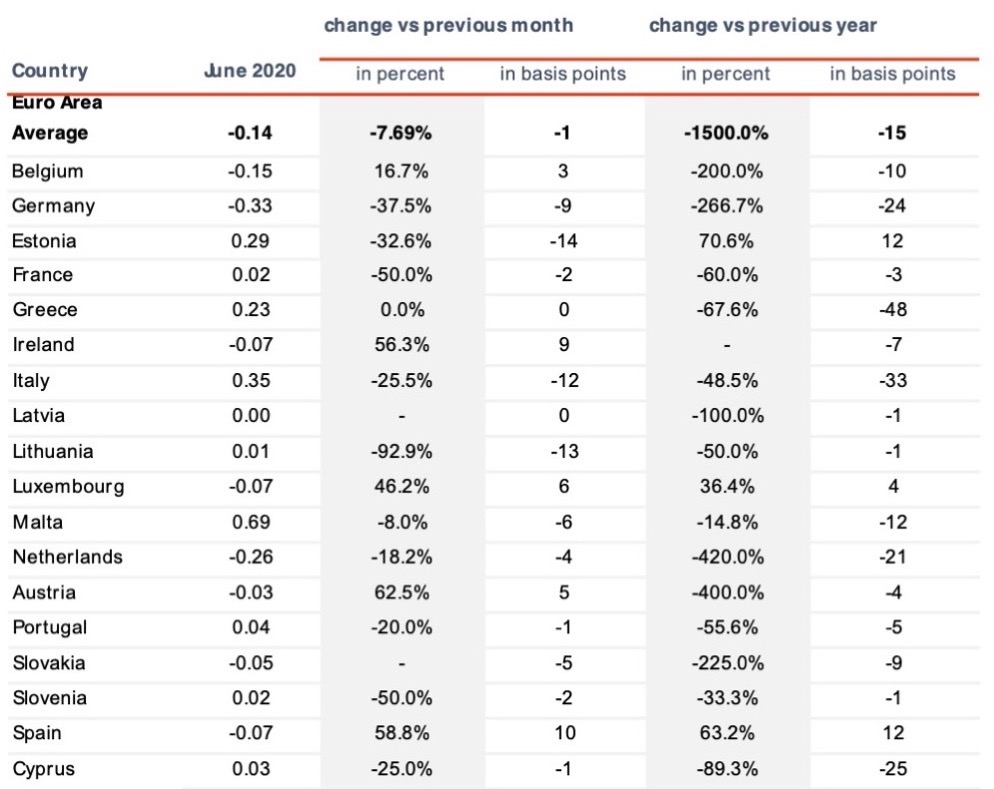 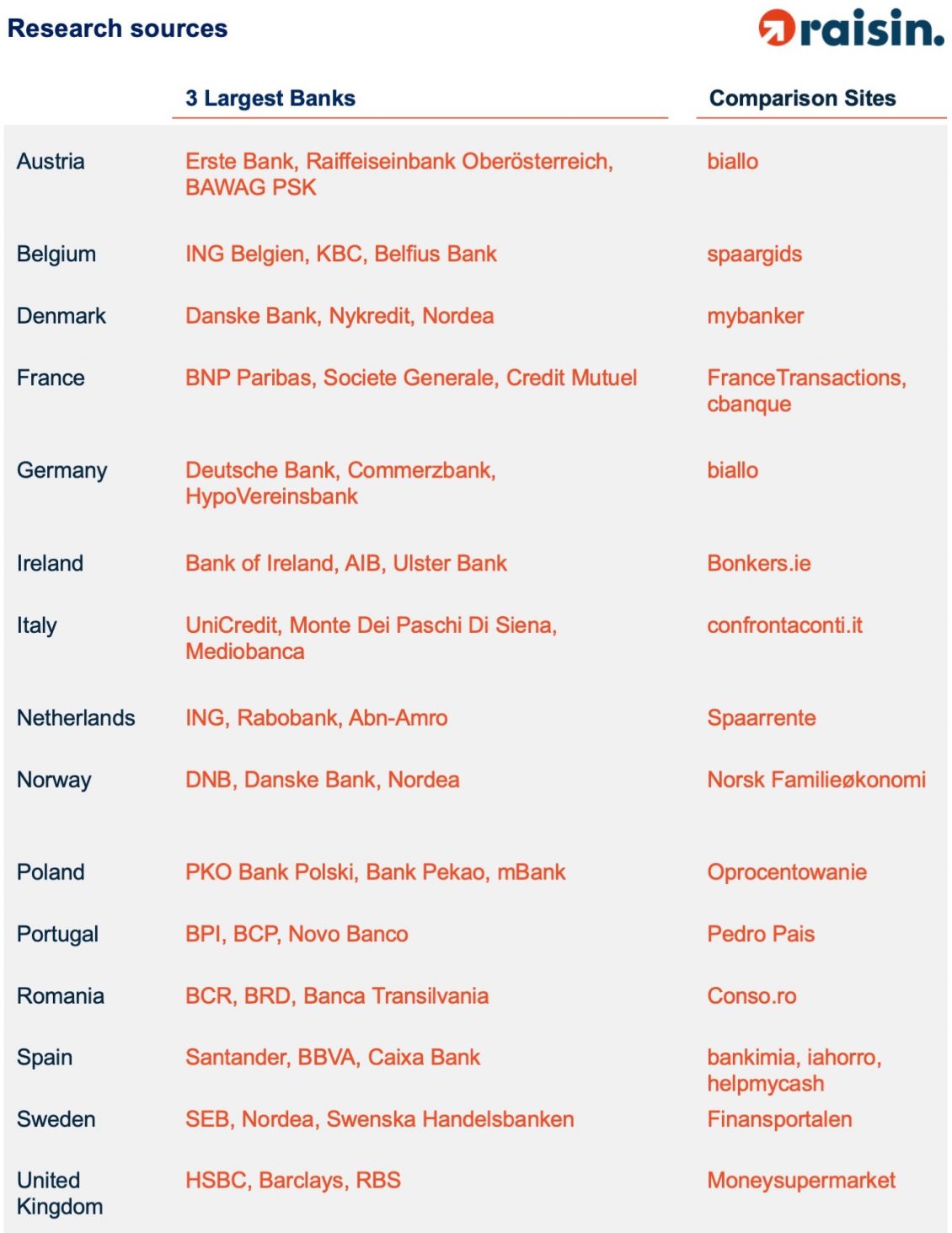 About Raisin
A trailblazer for open banking and the leading pan-European one-stop shop for online savings and investments, Berlin-based fintech Raisin was founded in 2012 by Dr. Tamaz Georgadze (CEO), Dr. Frank Freund (CFO) and Michael Stephan (COO). Raisin’s platforms — under the brand WeltSparen in the German-speaking world — are breaking down barriers to better savings for European consumers and SMEs: Raisin’s marketplace offers simple access at no charge to attractive and guaranteed deposit products from all over Europe, as well as globally diversified, cost-effective ETF portfolios and pension products (currently available in Germany). With one online registration, customers can choose from all available investments and subsequently manage their accounts. Since launch in 2013, Raisin has placed 25.5 billion EUR for more than 275,000 customers in 28+ European countries and 97 partner banks. Raisin was named to Europe’s top 5 fintechs by the renowned FinTech50 awards and is backed by prestigious European and American investors such as btov Ventures, Goldman Sachs, PayPal Ventures, Thrive Capital, Index Ventures, Orange Digital Ventures and Ribbit Capital. Raisin UK in Manchester, banking-as-a-service provider Raisin Bank in Frankfurt, pensions specialist fairr, and Raisin Technology (formerly Choice Financial Solutions) all belong to Raisin.