European stagnation: Too much cash at the big banks keeps driving rates further down

Raisin’s latest savings market analysis shows that, as the pandemic begins a second wave, interest rates have continued to fall. European countries feature significant spreads, however, between the interest rates at the biggest banks and the most competitive available deposits. Consumers in Europe can take advantage of the more profitable interest rates by looking countrywide or even across borders, particularly as inflation has fallen, but also compare between shorter and longer-term offers.

Following the analysis, Raisin VP for Business Clients and Partnerships Benedikt Voller explains the liquidity situation banks find themselves in and how it also impacts customers.

Poland, Sweden, Italy, and Norway feature the widest spreads between interest rates offered by their biggest banks and each market’s top available rates. Top 1-year rates ticked downward across western and southern Europe in the face of the pandemic’s second wave. The biggest banks’ held steady in nearly every country. 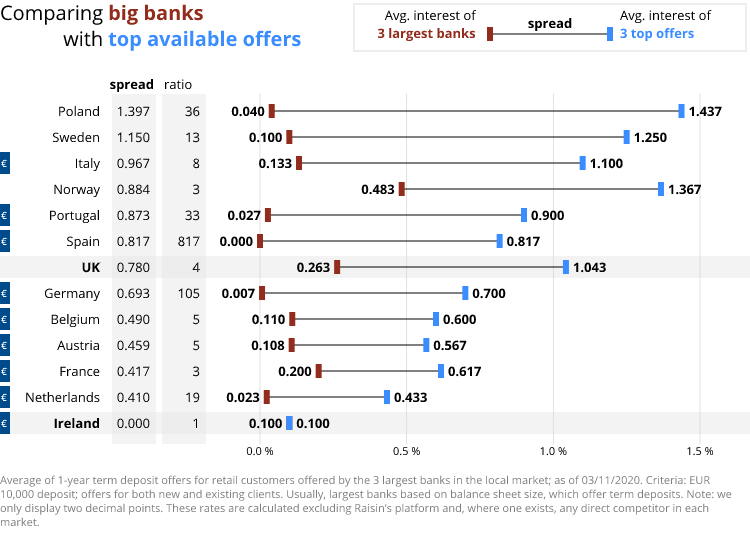 *Creating a ratio between Spain’s big bank average of 0% and the top offers of 0.817% is mathematically impossible but 817 better captures the real situation. These rates are calculated excluding Raisin’s platform and, where one exists, any direct competitor in each market.

Amidst an overall flatlining, Germany, France, Belgium and Spain all hover in place or sink yet further. With two of the highest savings rates in Europe, Spain and Germany are stuck at the lower end for top rates – meaning a ton of money sitting in the bank not earning great returns. Ireland’s few banks, flush with cash, continue to feature the lowest interest in Europe, while Italy’s stressed economy keeps its rates competitive despite sliding slightly the last few months. 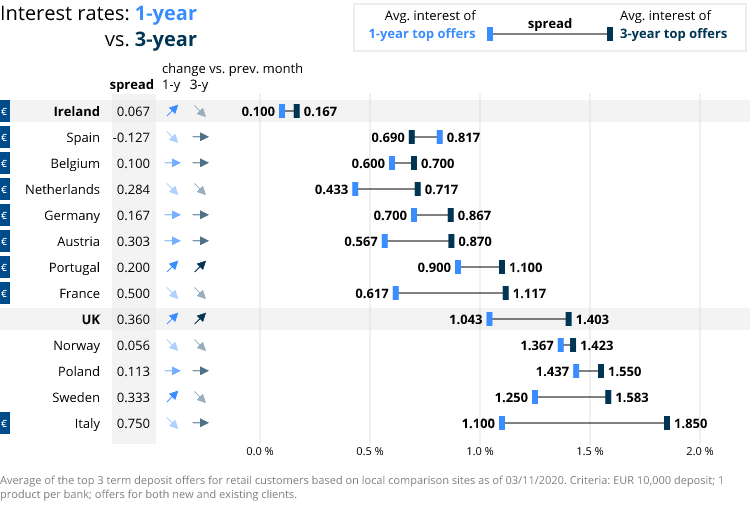 The end of summer saw upticks in retail rates on average in most of Europe. Across the Euro area nearly every country is seeing lower interest rates, however, compared to fall 2019, from just a couple of basis points lower in Spain and Germany to -39 basis points in France.

The latest announcements from the European Central Bank point to rates undergoing further pressure downward in December and suggest that the ECB will proceed with some easing of its monetary policy stance. President Lagarde mentioned at her recent press conference that, “we have little doubt, given what is expected as a result of the risks that we are seeing, that circumstances will warrant the recalibration and the implementation of this recalibrated package.” 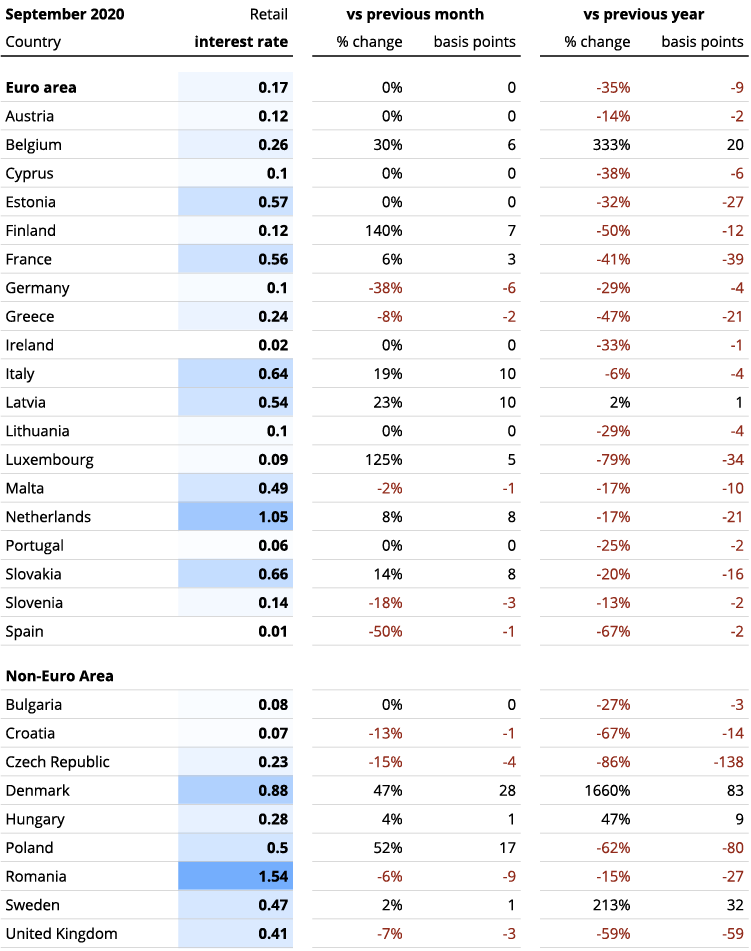 The magic numbers are 1, 2, and 3: half of the countries in our European Central Bank data went up or down 1, 2, or 3 basis points. But this also means businesses in nine European countries still pay negative interest on their deposits on average, and another nine countries earn less than 0.10%. 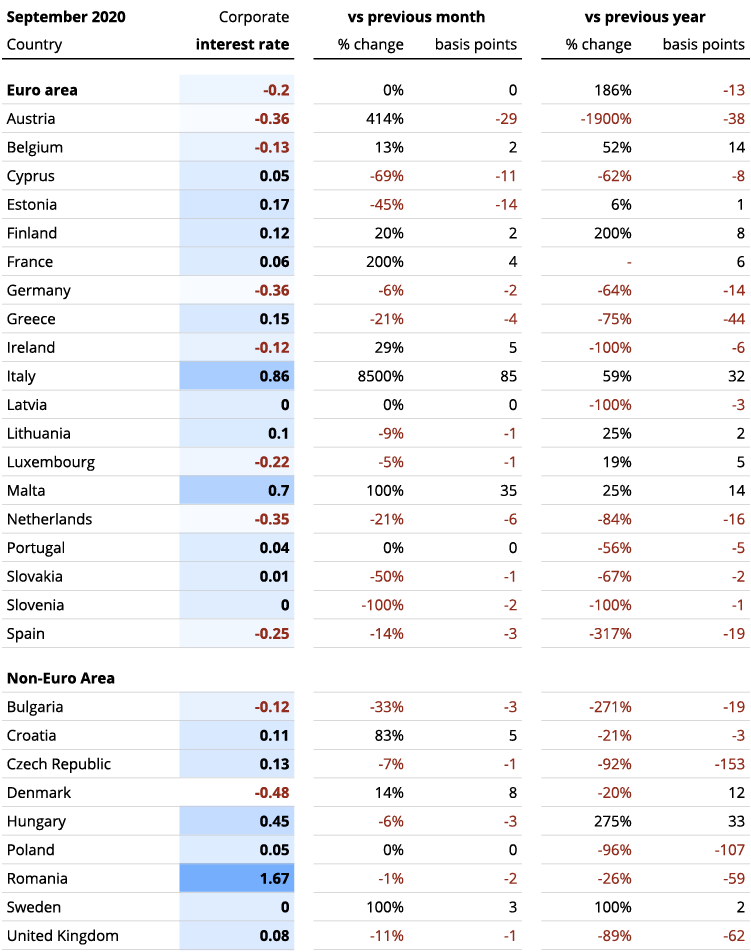 Raisin VP for Business Clients and Partnerships Benedikt Voller explains how banks are experiencing the current low rates as well as fiscal stresses caused by the Coronavirus pandemic:

“In the current environment of ongoing low and negative interest rates, European banks have received guidance from the ECB to keep economies across Europe afloat, accompanied by liquidity being pumped into the market via pandemic-related subsidies. As a result, however, many banks are facing an over-liquid situation on their balance sheets. Not all the deposits can be used to create more assets and deliver loans onto the market. Significant costs thus occur, including:

In order to minimise the impact, retail banks must often lower interest rates for customers, sometimes even pushing rates below zero, to nudge customers’ liquidity into other products. Or simply away, to other providers. This creates not just a dilemma for customers – missing potential yields on their savings and having to leave their home banks – but also for banks. Financial institutions stand to lose long-standing customer relationships unless they succeed in offsetting low or negative rates with attractive enough alternative products or services. So the current liquidity situation is driving banks to look for innovative solutions to the longer-term interest rate impasse.”

About Raisin
A trailblazer for open banking and the leading pan-European one-stop shop for online savings and investments, Berlin-based fintech Raisin was founded in 2012 by Dr. Tamaz Georgadze (CEO), Dr. Frank Freund (CFO) and Michael Stephan (COO). Raisin’s platforms — under the brand WeltSparen in the German-speaking world — are breaking down barriers to better savings for European consumers and SMEs: Raisin’s marketplace offers simple access at no charge to attractive and guaranteed deposit products from all over Europe, as well as globally diversified, cost-effective ETF portfolios and pension products (currently available in Germany). With one online registration, customers can choose from all available investments and subsequently manage their accounts. Since launch in 2013, Raisin has placed 27.5 billion EUR for more than 295,000 customers in 28+ European countries and 100 partner banks. Raisin was named to Europe’s top 5 fintechs by the renowned FinTech50 awards and is backed by prestigious European and American investors such as btov Ventures, Goldman Sachs, PayPal Ventures, Thrive Capital, Index Ventures, Orange Digital Ventures and Ribbit Capital. Raisin UK in Manchester, banking-as-a-service provider Raisin Bank in Frankfurt, pensions specialist fairr, and Raisin Technology (formerly Choice Financial Solutions) all belong to Raisin.