Europe has begun opening back up following extensive lockdowns to control the Covid-19 pandemic but, according to most analyses including that of German Chancellor Angela Merkel, the continent has a long way to go on the road to recovery. The most powerful political players in Europe, Merkel and France’s Emmanuel Macron, joined the interventionist side along with the European Central Bank, making the case for strong measures to support the EU’s harder hit economies, despite protest from among the German conservatives and free market liberals. The ECB’s chief economist Philip Lane argued that the central bank’s steps thus far, including  “PEPP; refinancing operations; collateral-easing measures,” have contributed to the EU’s stabilization (PEPP referring to the pandemic emergency purchasing programme).

Top 1-year interest rates on deposits in Germany, the Netherlands, Portugal, Denmark, and as far east as Romania are between 0.57% and 0.97%, while the same deposits at those markets’ largest banks all feature rates under 0.05%, according to Raisin’s new research.

Rates on 1-year deposits at the biggest financial institutions in Spain, Belgium, Austria, and Ireland are not much higher, all hovering around 0.1%.

The European Central Bank’s deposit rate currently stands at -0.50%. Banks are required to hold funds in reserve with the ECB to cover withdrawals by their customers. They generally deposit much more than the mandatory amount, however, and pay the penalty. The ECB’s interest rate is seen as a tool: by pushing down the cost of credit and making banks pay when they hold onto cash rather than lend it, the central bank intends to stimulate lending, investing and other economic activity. But at the moment many of the biggest banks simply have too much cash and are either reluctant to use it on lending or aren’t experiencing enough demand.

Smaller banks don’t have this problem, rather tending to need to attract more customers to build up their liquidity, to meet local and regional demand for loans. So small to mid-sized banks often offer more lucrative interest rates, and a gap develops between interest rates at the biggest banks and small to mid-sized institutions. For consumers the more profitable alternatives don’t involve greater risk, since all of their deposits are covered by the European deposit guarantee schemes in each country up to EUR 100,000.

The gap between rates at the largest banks and top available rates especially stands out in Germany, the Netherlands, Portugal and Denmark. Consumers in Spain and Italy, though, as well as Belgium, Austria and Sweden, cannot count on the big familiar banks in their markets if they want to earn any yield on their term deposits.

In the UK the ratio is just 2:1, one of the narrowest, and yet the difference for consumers is still a matter of earning twice as much interest by shifting money into top offers. Only in Ireland, when Raisin’s 1-year offers are excluded (currently up to 13 times higher than the average rates at the big banks)*, the ‘top offers’ have sunk lower than the biggest banks’ offers.

*These rates are calculated excluding Raisin’s platform and, where one exists, any direct competitor in each market. 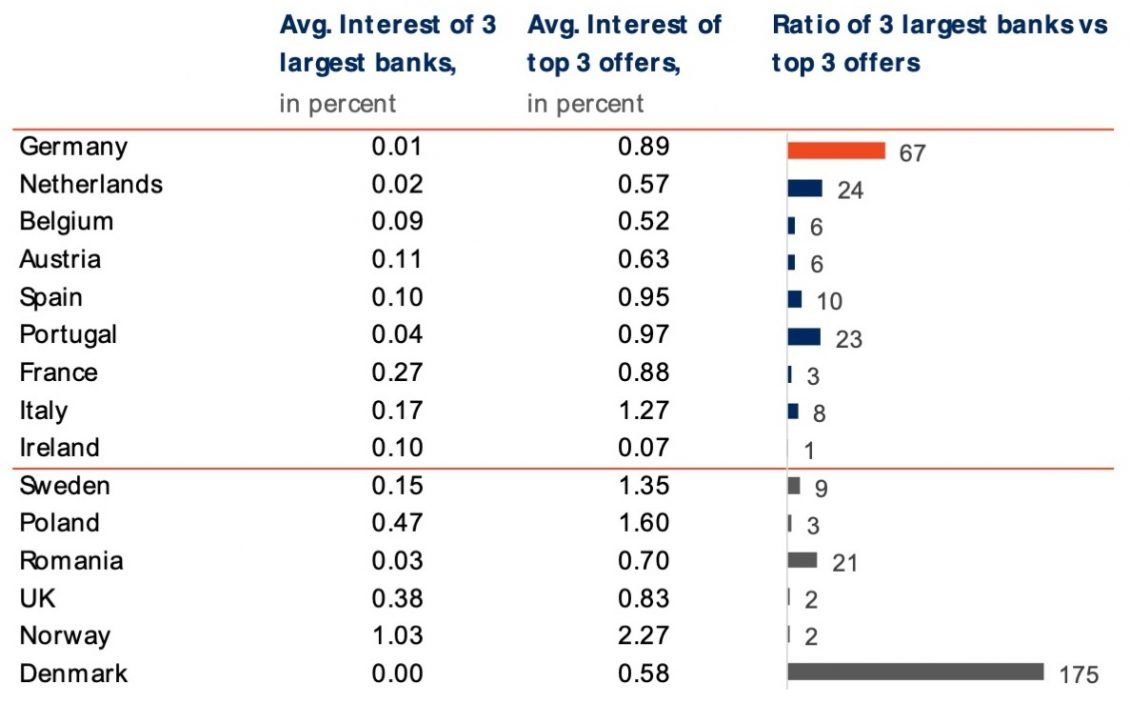 Top rates on deposits decline across much of Europe

Across Europe a number of the largest economies saw their top 1- and 3-year rates sink, including Germany, the Netherlands, Sweden, Norway and the UK. Top rates in France, Austria, Belgium, Portugal and Ireland held steady. Not a single market saw an increase in top rates since mid-May.

Even so, top rates remain far above the interest offered on deposits at the largest banks in most European markets. 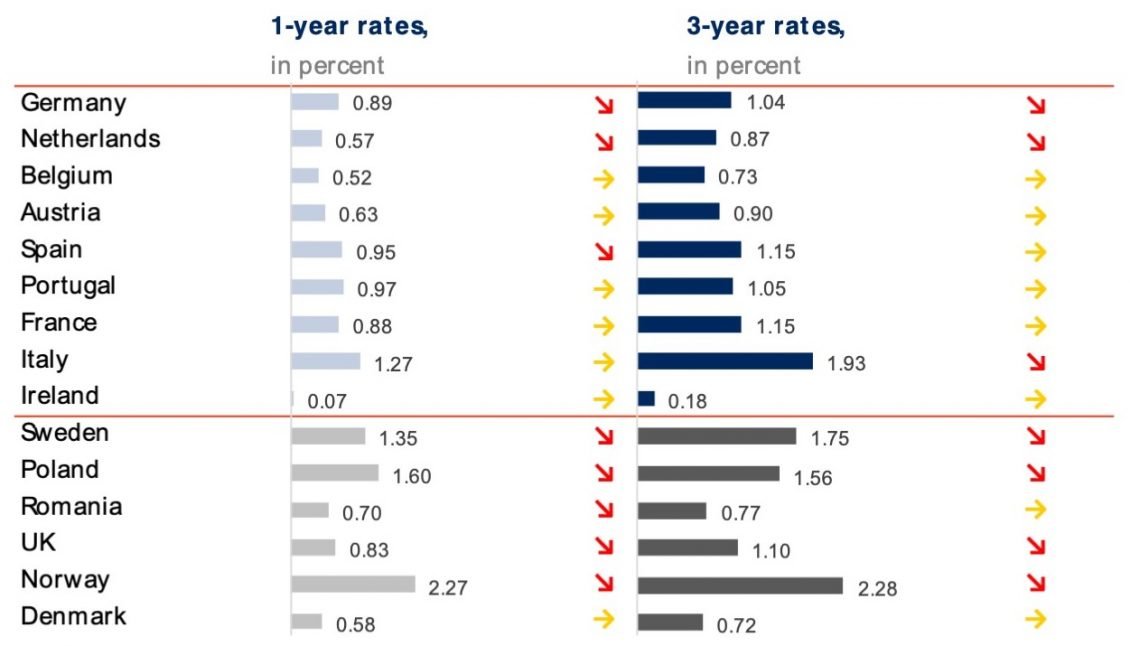 Average of the top 3 term deposit offers for retail customers based on local comparison sites as of 23/06/2020. Criteria: EUR 10,000 deposit; 1 product per bank; offers for both new and existing clients.

The European Central Bank’s most recent data on retail interest rates (April) shows an overall decline as the impact of the pandemic sank in, with the Eurozone average dropping 29% (minus 9 basis points).

At least ten of the Eurozone countries are stuck under 0.2% on average for an up to one-year deposit. 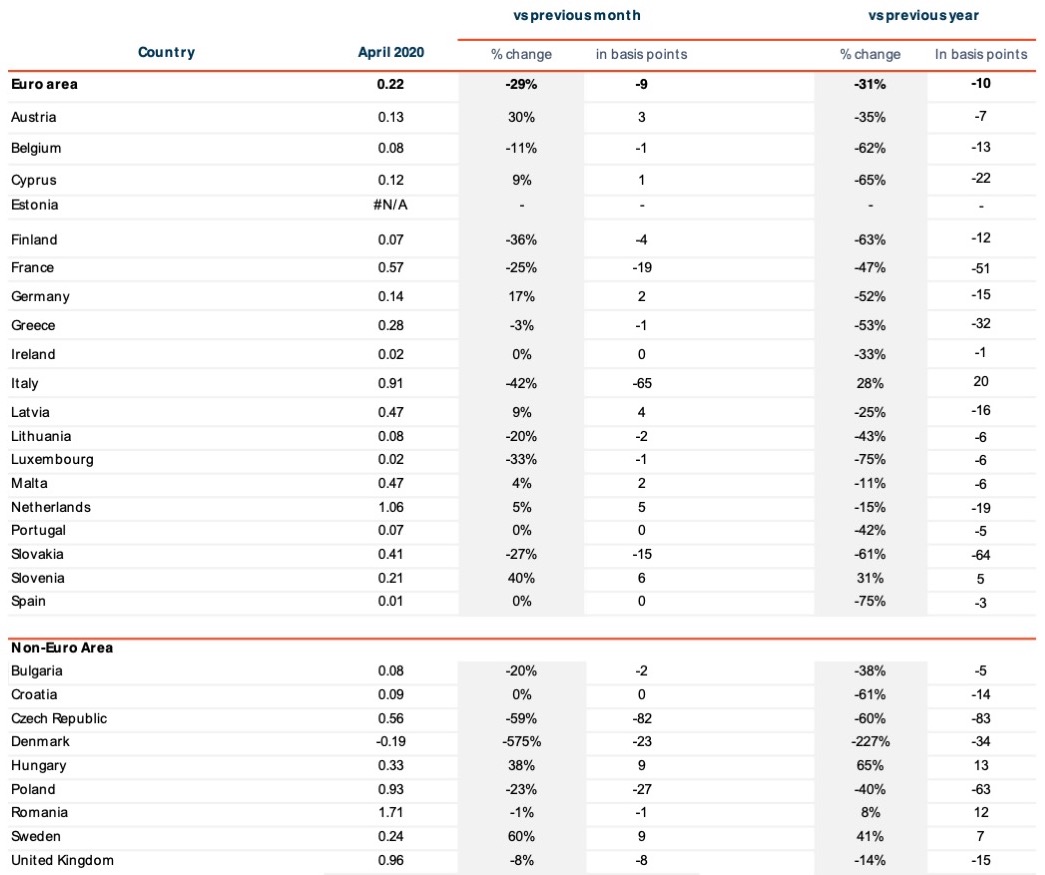 The first weeks of the global Covid-19 pandemic saw significant changes in corporate interest rates with Spain, the Netherlands, and Belgium all dropping 13 to 16 basis points, and Malta plunging down 61 basis points. This is according to the European Central Bank’s latest data, from April 2020.

Spain has now joined the countries with negative interest rates, with a new average -0.12% on corporate deposits.

At the same time corporate rates in Germany, Austria, Italy and the Baltic countries (particularly Estonia, Lithuania and Finland) rose significantly. Germany and Austria, however, still feature on average negative corporate rates of -0.17% and -0.01% respectively.

Corporates in Germany can find much products with much higher yields, however, on deposit platforms. (Through a Commerzbank portal as well as on its own German business platform Raisin, for instance, currently offers rates up to over 2% from banks in Germany, France and other European Economic Area markets.) 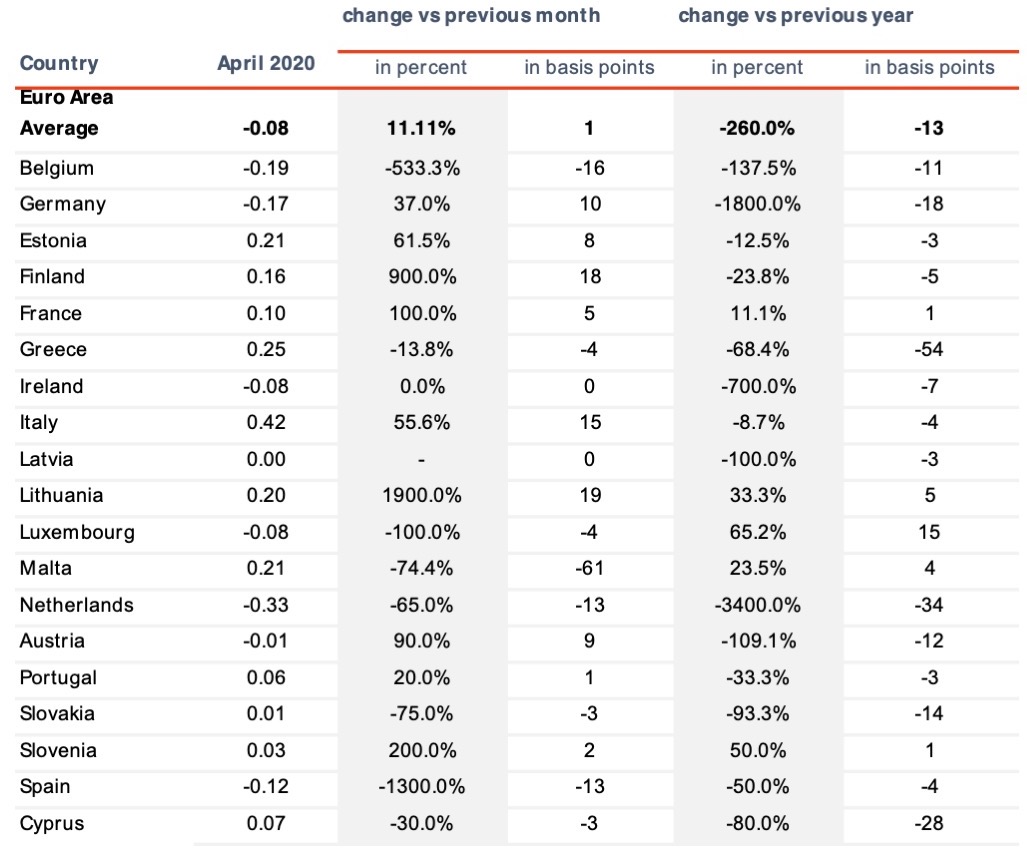 About Raisin
A trailblazer for open banking and the leading pan-European one-stop shop for online savings and investments, Berlin-based fintech Raisin was founded in 2012 by Dr. Tamaz Georgadze (CEO), Dr. Frank Freund (CFO) and Michael Stephan (COO). Raisin’s platforms — under the brand WeltSparen in the German-speaking world — are breaking down barriers to better savings for European consumers and SMEs: Raisin’s marketplace offers simple access at no charge to attractive and guaranteed deposit products from all over Europe, as well as globally diversified, cost-effective ETF portfolios and pension products (currently available in Germany). With one online registration, customers can choose from all available investments and subsequently manage their accounts. Since launch in 2013, Raisin has placed 23.5 billion EUR for more than 265,000 customers in 28+ European countries and 92 partner banks. Raisin was named to Europe’s top 5 fintechs by the renowned FinTech50 awards and is backed by prestigious European and American investors such as btov Ventures, Goldman Sachs, PayPal Ventures, Thrive Capital, Index Ventures, Orange Digital Ventures and Ribbit Capital. Raisin UK in Manchester, banking-as-a-service provider Raisin Bank in Frankfurt, pensions specialist fairr, and Raisin Technology (formerly Choice Financial Solutions) all belong to Raisin.