A new survey conducted by deposit platform Raisin Spain reveals that affluent Spanish consumers have a high level of awareness of the economy and openness to new banking models. Raisin Spain asked over 600 affluent Spanish consumers (with net monthly income above €2000) about their saving habits and preferences, as well as how they gain knowledge about the market and what information they’re missing. Over half (52%) prefer to save rather than spend, given the current economic situation, while nearly three quarters (72%) are aware of interest rates in Spain and believe they are too low. (In fact, Spanish retail rates have long been on average the lowest in Europe.) 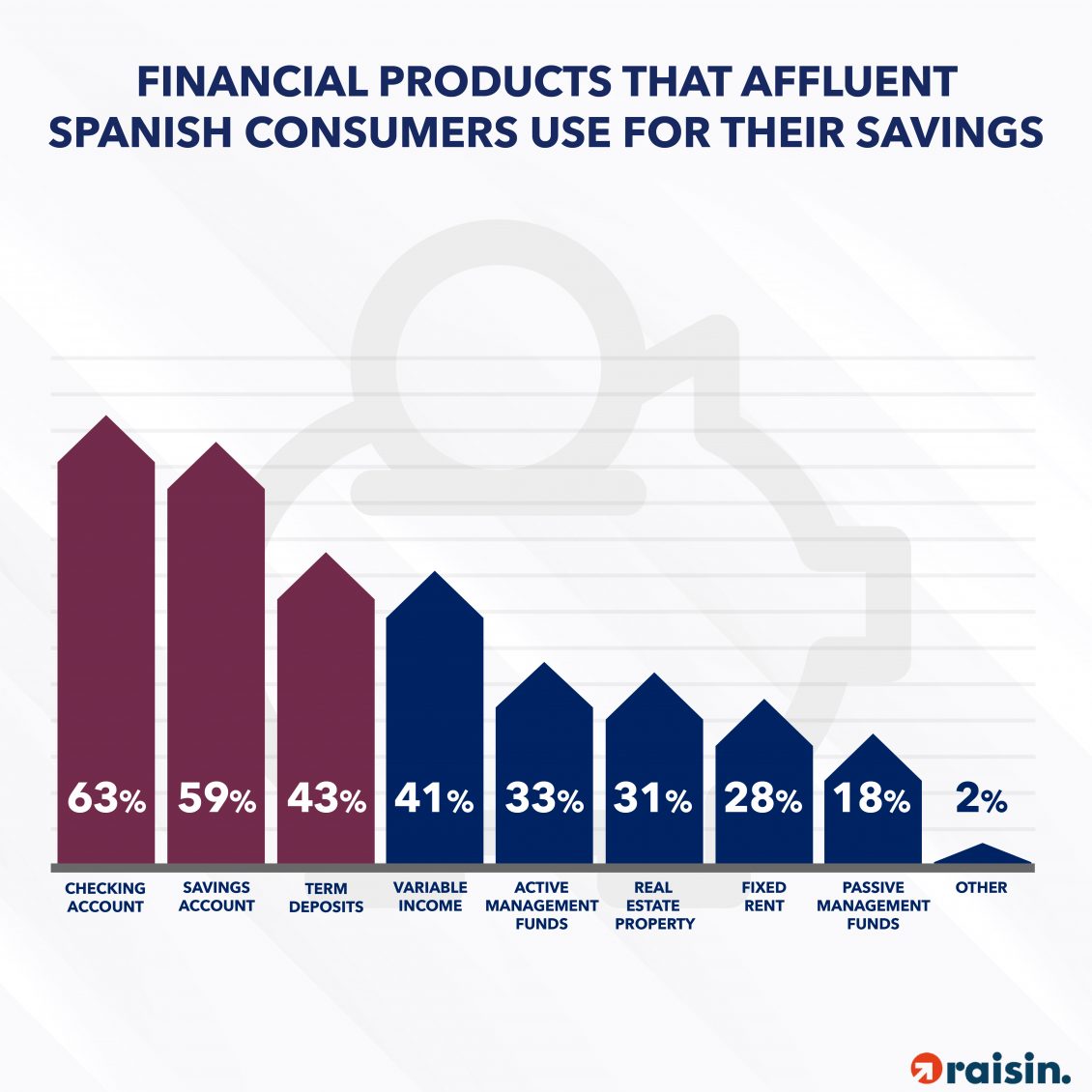 Those surveyed revealed broadly conservative views about saving and investing, with large majorities holding savings in a current account (63%) and/or a savings account (59%) and more than four in ten using term deposits (43%) as the most profitable among the savings options. A third or fewer preferring various market-linked investment vehicles.

Meanwhile nine out of ten (91%) of those surveyed are ready to move their savings outside of Spain for better rates, and seven in ten (72%) are open to online deposit products. These consumers expressed particularly high levels of trust in neighbouring countries as well as Benelux markets, German-speaking countries, and Scandinavia, where they can invest via platforms like Raisin.es with Norwegian, French, Belgian, Austrian, Italian, and Portuguese banks. 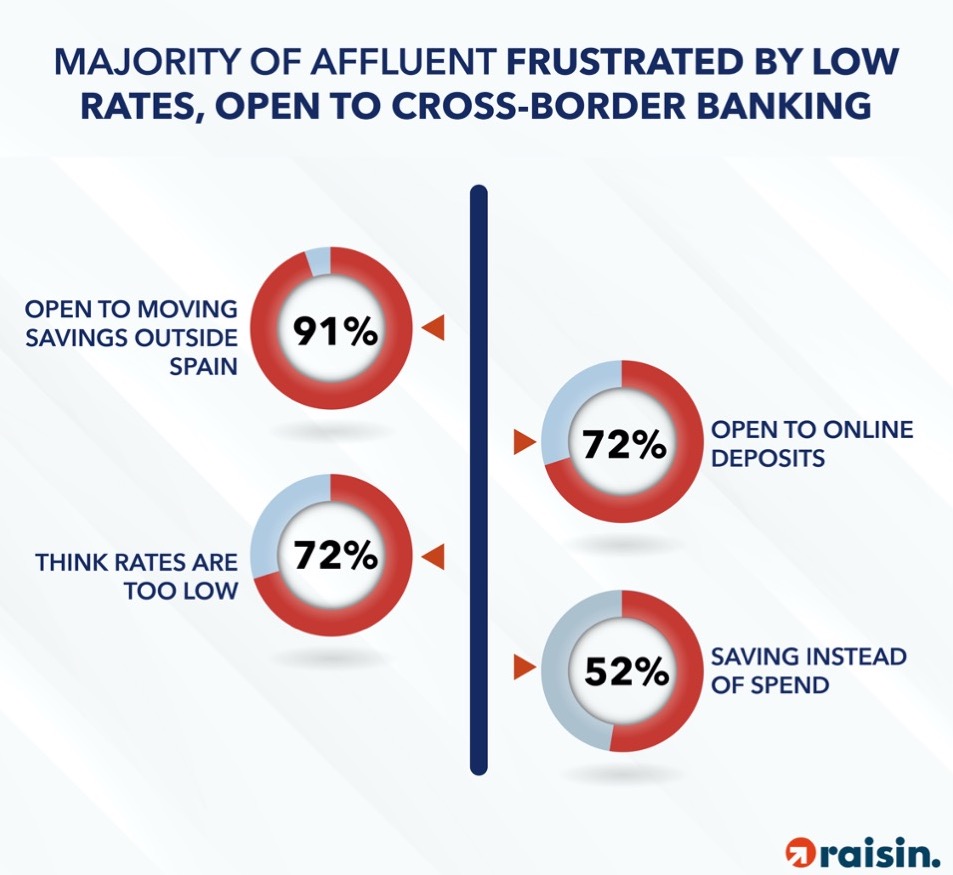 Despite the respondents’ readiness for digital banking, only 40% use internet as info source and one in three have given up trying to find good returns for their money

In addition to a marked openness to online banking, the survey shows a widespread appetite to learn, with 79% saying they want to learn more about personal finance. Despite this interest, only four in ten (40%) report using the internet as a research tool to search for information about financial products.

Just a fraction of the affluent are aware that their savings are guaranteed in Spain and every other European market. (Following EU guidelines, all EEA markets have instituted deposit guarantee schemes up to 100,000 EUR per person per bank.)

Large majority of affluent Spanish consumers plan ahead to pursue key financial goals, even as most say they want to learn more

According to the new survey, just over half of respondents (52%) are focused primarily on retirement, while three in ten (30%) are saving to buy their own home. Seven in ten (70%) are saving actively at the moment, and of those, 72% plan ahead, setting money aside at the start of the month. Only 28% leave it to circumstance and save whatever they have left at the end of the month. 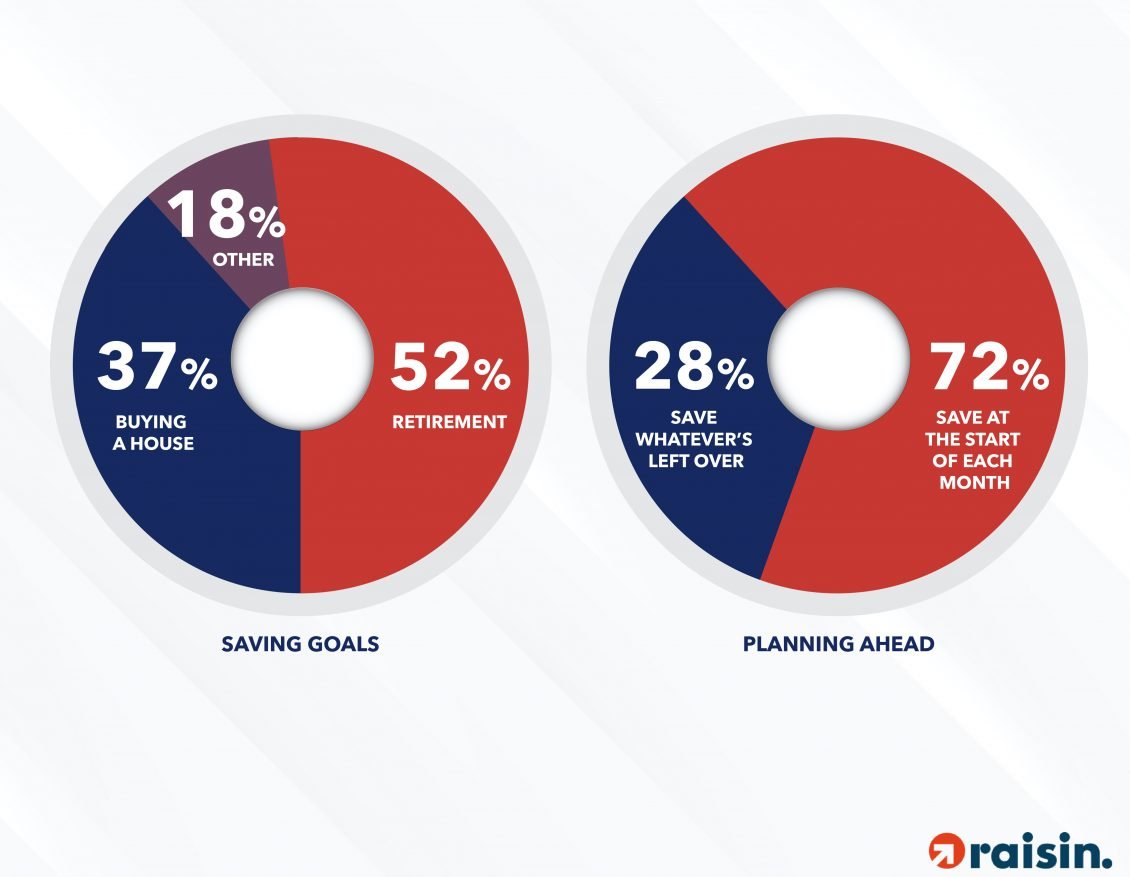 Thus, although most of those surveyed are already engaged in financial planning and eager to optimize their savings, most are under-informed and feel they’re missing the tools they need to take the right steps.

A trailblazer for open banking and the leading pan-European one-stop shop for online savings and investments, Berlin-based fintech Raisin was founded in 2012 by Dr. Tamaz Georgadze (CEO), Dr. Frank Freund (CFO) and Michael Stephan (COO). Raisin’s platforms — under the brand WeltSparen in the German-speaking world — are breaking down barriers to better savings for European consumers and SMEs: Raisin’s marketplace offers simple access at no charge to attractive and guaranteed deposit products from all over Europe, as well as globally diversified, cost-effective ETF portfolios and pension products (currently available in Germany). With one online registration, customers can choose from all available investments and subsequently manage their accounts. Since launch in 2013, Raisin has placed 24.5 billion EUR for more than 270,000 customers in 28+ European countries and 95 partner banks. Raisin was named to Europe’s top 5 fintechs by the renowned FinTech50 awards and is backed by prestigious European and American investors such as btov Ventures, Goldman Sachs, PayPal Ventures, Thrive Capital, Index Ventures, Orange Digital Ventures and Ribbit Capital. Raisin UK in Manchester, banking-as-a-service provider Raisin Bank in Frankfurt, pensions specialist fairr, and Raisin Technology all belong to Raisin.