Berlin, 31. January 2019. The pan-European deposits platform Raisin (www.raisin.com) regularly publishes the Raisin Interest Rate Radar to explore the effects of European Central Bank rate policy on savers throughout Europe. One main finding: the gap between low-interest regions and areas with competitive rates continues to grow – for example in Germany. Rates on fixed-rate term deposits at Germany’s largest banks are on average just 0.03% while elsewhere on the continent savers can earn 38 times that much. Stagnant rates affect not only retail customers but also corporate accounts.

The ECB has left its policy stance unchanged coming out of the January monetary policy meeting, however “acknowledging weaker momentum and a changing balance of risk for growth.” The deposit rate will remain at -0.4%. Market prices currently reflect a rate increase around mid-2020.

The slowdown in Eurozone economic activity is increasingly seen as persistent, as uncertainty surrounding global trade, Brexit and the Italian economy prevails. Wage growth has slowed further, a predicted increase in inflation has failed to materialize, and exports and eurozone investments are slowing.

The economies of Germany and Italy contracted in the third quarter of 2018 with growth rates of -0.2% and -0.1% respectively. The Bank of Italy stated that the Italian GDP may have contracted for a second consecutive quarter in 4Q18 suggesting that the economy entered a recession.

One month after quantitative easing (QE) stopped, interest rates continue to decline: On the European level, interest rates declined by 3% compared to the previous month and 19% compared to previous year. While not surprising, we should note that we cannot yet see any impact from the stop of QE.

Rates in Germany steadily hover around 30 bps. After a decline of 3 bps last month, rates were raised again by 2 bps, representing a 67% increase compared to previous year. Italian rates increased by a considerable 9 bps, continuing the upward trend started in the second half of last year. The biggest loser is Slovakia, with a decline of 7 bps. Note, however, that this still puts them 16 bps above the previous year’s level.

With regards to foreign currency deposits, we have 2 clear winners: Poland and the Czech Republic, both with an impressive increase of 20 bps each. In the last issue we looked at the UK and whether Brexit already shows in the data. We cautiously called it speculation and indeed after a rise in the previous month, rates declined again by 7 bps. 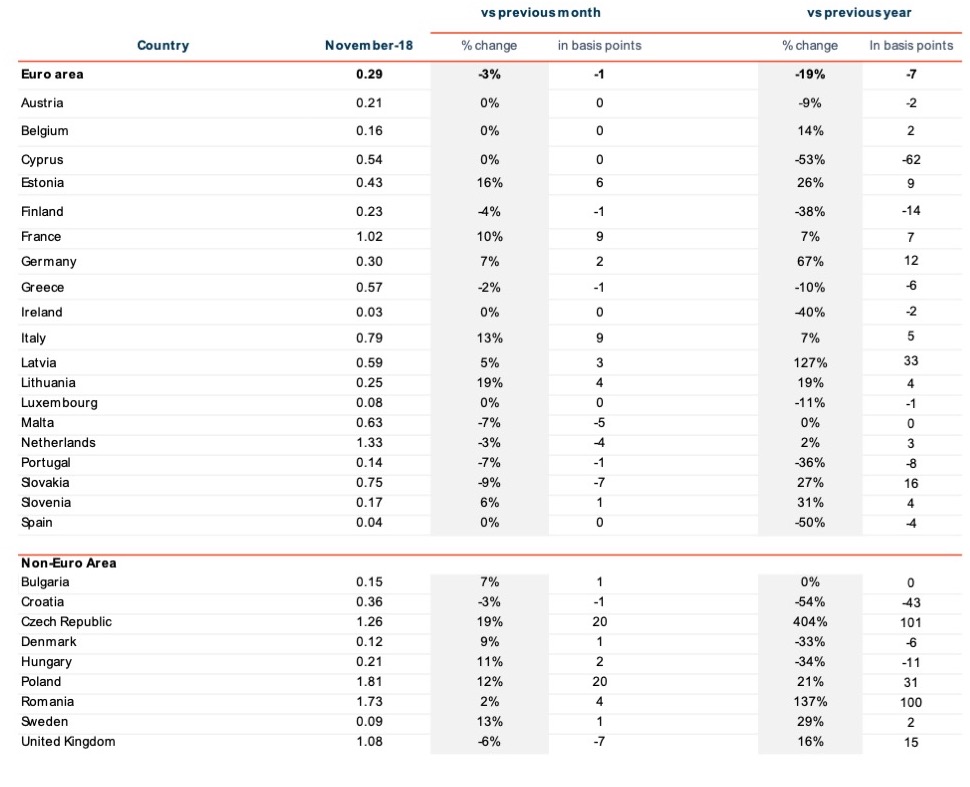 Funding conditions in Italy are not only reflected in the ECB data, but on rate-comparison portals as well. Compared to previous month, the Italian rates increased to 1.75% for 1 year and 2.28% for 3 years. This month, FX deposits took the lead again for the highest rates, with Poland leading the pack. In part this is caused by a top offer of Idea Bank offering 3.10% on PLN. 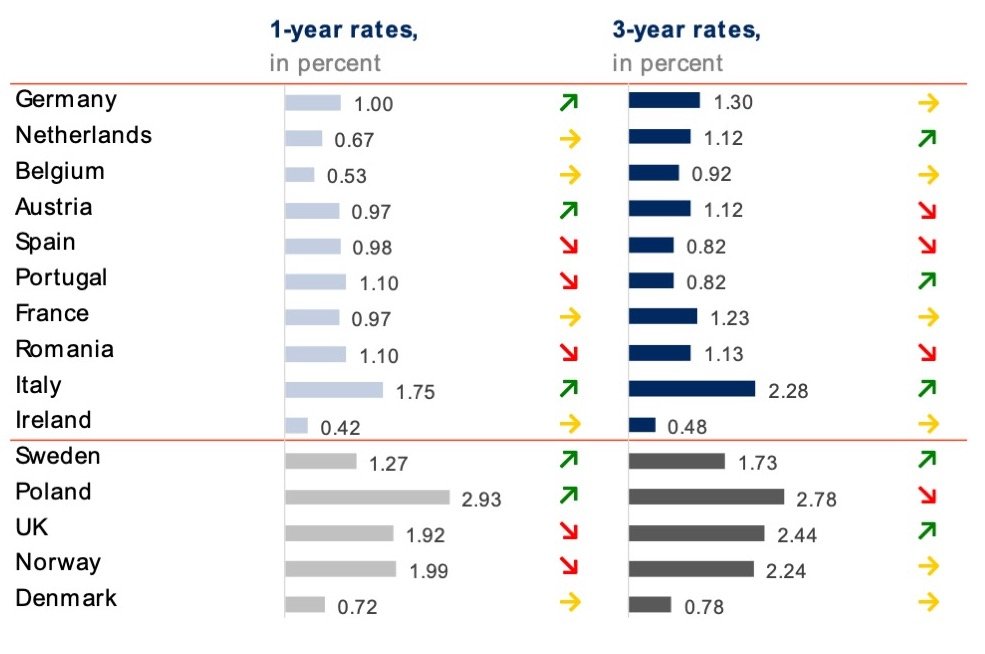 Average of the top 3 term deposit offers for retail customers based on local comparison sites as of 10.12.2018. Criteria:  EUR 10,000 deposit; 1 product per bank; offers for both new and existing clients.

In general the funding gap between large banks and top offers remained largely the same. If anything we can see a slight tightening of big banks’ funding conditions, as multiples slightly decreased. We see this difference most severely in Germany where the average rates of the 3 largest banks continue at 0.03% while the average of the top 3 offers is 1.00%, a 38-fold gap. 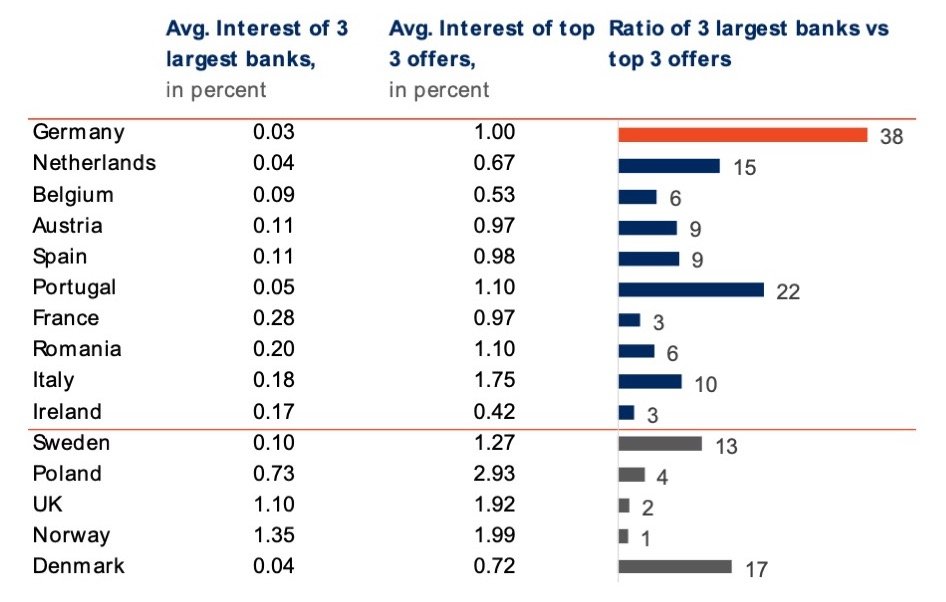 1 Usually, largest banks based on balance sheet size, which offer term deposits; detailed list on the next page.

Average of 1-year term deposit offers for retail customers offered by the 3 largest banks in the local market; as of 10-12-2018. Criteria: EUR 10,000 deposit; offers for both new and existing clients.

On average corporate deposits decreased yet again, although Lithuania experienced an increase of 9 bps representing a 112.5% increase compared to the previous month. This simply brings Lithuania back to where it was one year ago whereas Belgium’s 52.4% increase from last month corresponds to a 66.7% increase since last year. In Italy corporate rates increased to a striking 62 bps, with a 10 bps increase from the previous month. The biggest loser appears to be Cyprus, where corporate rates declined by 29 bps. 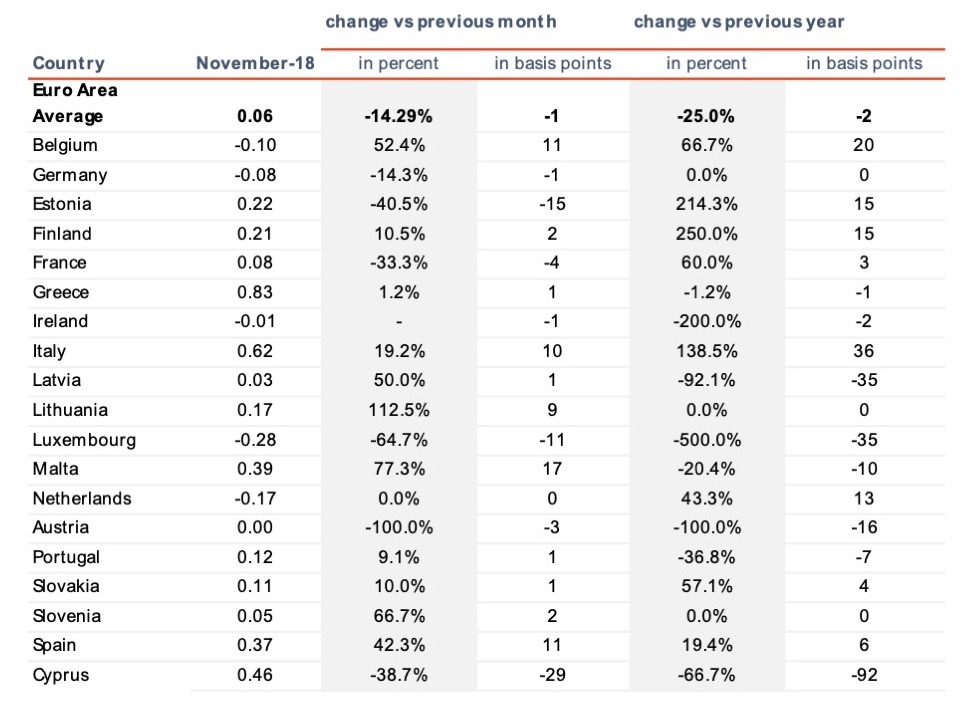 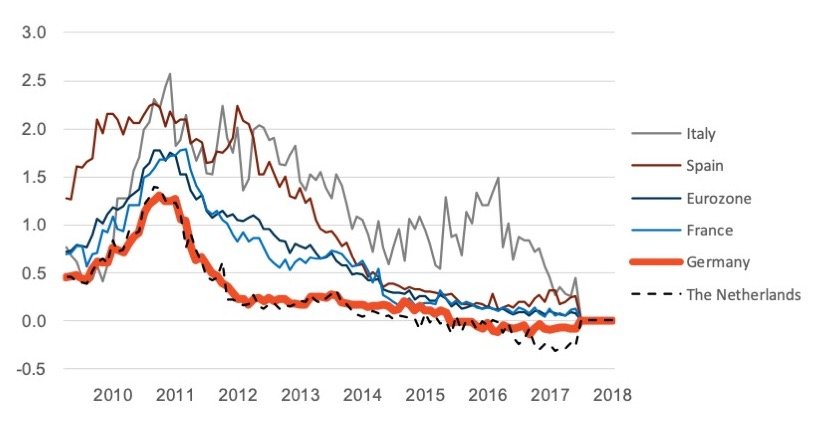 Beer and Wine: Do they mirror saving habits? We may assume that because wine is more expensive than beer,…

Interview with Hana Frankova from the European Commission

Hana Frankova is a policy officer in the European Commission, in the unit dealing with Retail financial s…