Regardless of what country you might look at – retail deposit interest rates seem to know only one direction: Down. While five years ago they were still at almost three percent for a 1-year deposit, nowadays they are on average at 0.39 percent in the EU: 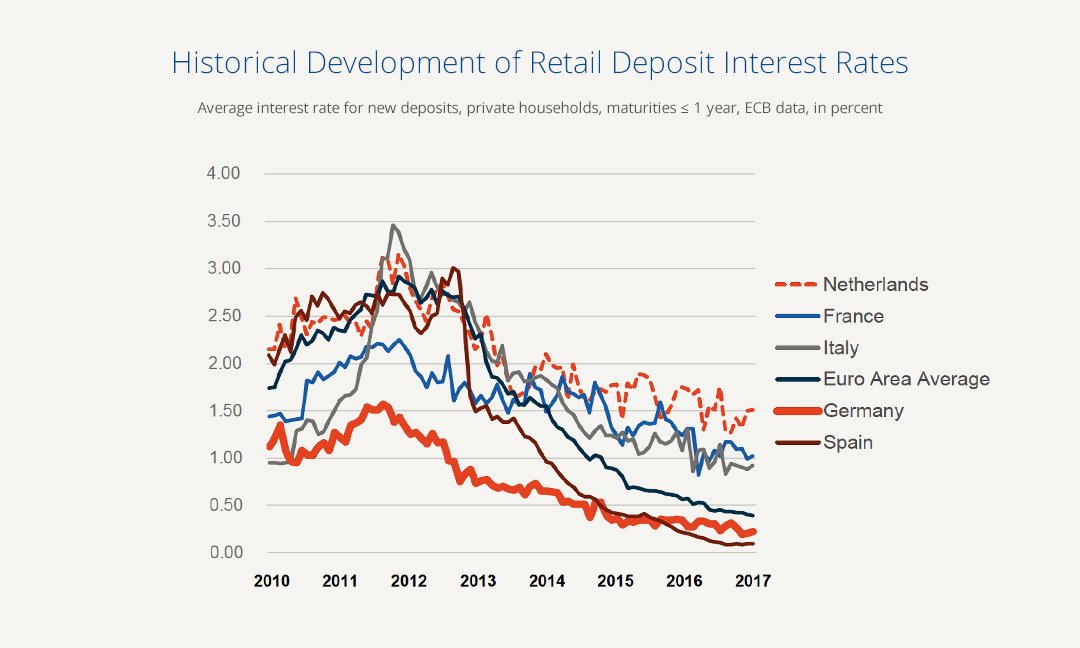 The lowest interest rates are currently offered in Spain and Slovenia, where, according to ECB data, 0.09 percent or 0.11 percent are being offered. The highest average interest rates can be found in the Netherlands* (1.51 percent) and in Cyprus (1.35 percent).

The strongest movement down since last year has happened in Slovakia, Belgium and Malta: In Slovakia, interest rates slid from 1.50 to 0.60 percent, in Belgium from 0.90 to 0.20 percent and in Malta from 1.20 to now 0.60 percent. Slightly positive developments occured only in Estonia, Latvia and Lithuania – however interest rates in all three baltic states remain remarkably lower than the EU average.

*The percentage of 1.51 in the Netherlands (according to ECB data) is not in line with our research on the Dutch comparison site Spaarente: According to the portal a maximum of 0.8 percent is available. 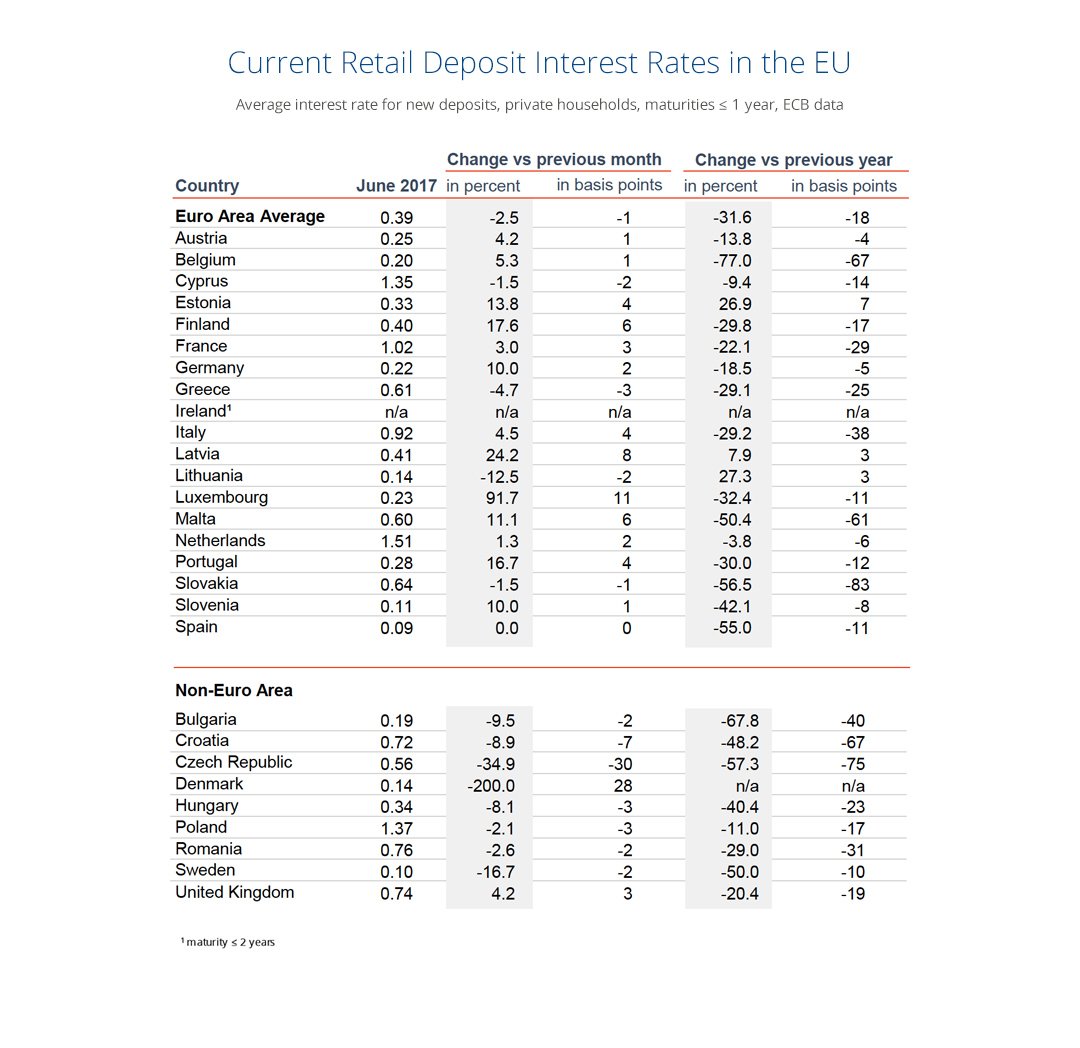 By end of August 2017, the best offers for a 1-year deposit in Europe where available in Poland (2.48 percent), followed by Italy (1.92 percent), Norway and the United Kingdom (both 1.90 percent on respective local currencies). As for term deposits with maturities of 3 years, it was pretty much the same picture: Poland (2.72 percent), Italy (2.41 percent), United Kingdom (2.24 percent) and Norway (1.94 percent) lead the ranking. The least attractive offers were available for 1-year and 3-year deposits from Belgium and Ireland. 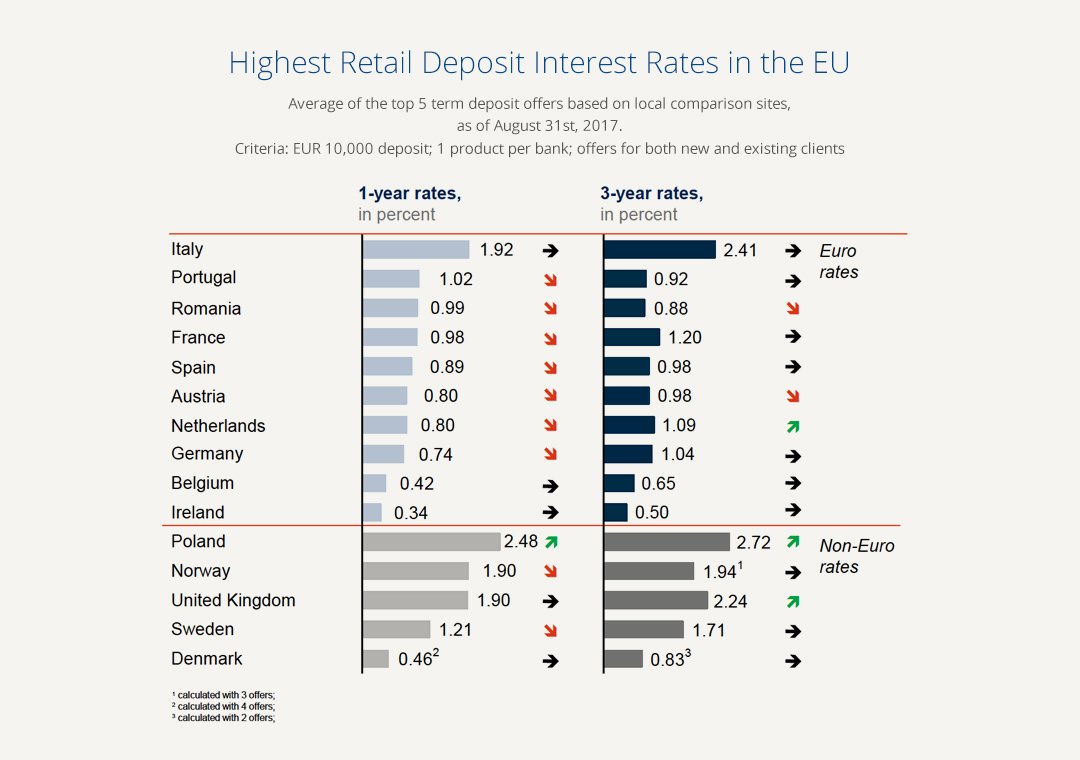 Looking only at the three largest banks of a country, the results are devastating: In the Eurozone, the market leaders offer their clients interest rates that are significantly lower than the most attractive rates available in the respective market: The highest interest rates for a 1-year deposit are still available in France and Italy with 0.28 or 0.27 percent – even though, smart savers could get 0.98 percent or 1.92 percent as well for the same investment horizon. In Germany and the Netherlands, the three largest banks offer the lowest interests across Europe (0.30 or 0.40 percent) – and that means only a fraction of what was available at the same time in the market. 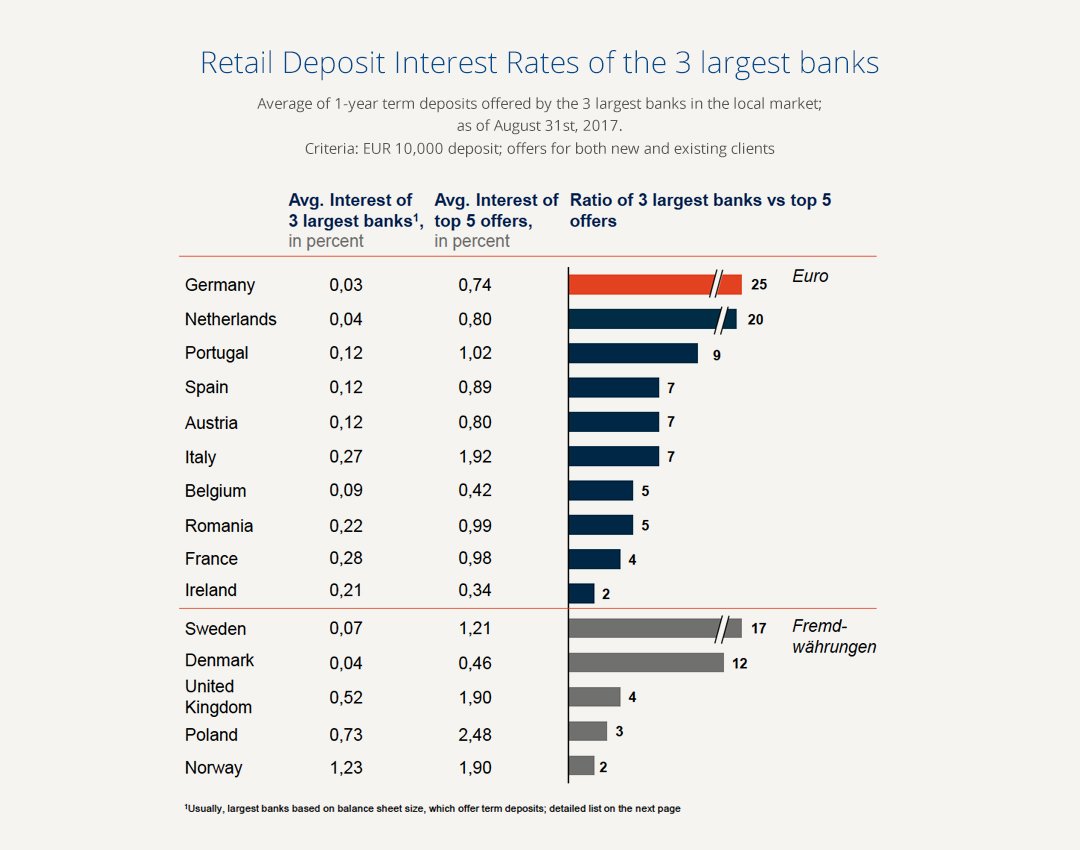 As of August 31st; Sources: