The European Central Bank Will Keep Key Interest Rate at Its Current Level:
Following today’s Governing Council meeting in Frankfurt, the ECB has announced that they will leave the key interest rate, at which commercial banks can borrow money from the central bank, at a record low of 0%. Mario Draghi also said that the ECB will leave the deposit rate unchanged at -0.40% and that the ECB intends “to continue to make net asset purchases under the asset purchase programme (APP), at a monthly pace of €30 billion, until the end of September 2018, or beyond, if necessary”. For savers this means that the historically low deposit interest rates shown below will remain unchanged for the time being!

Current Retail Deposit Interest Rates in the EU:
According to ECB data, the highest average interest rates for new deposits with maturities of less than or equal to one year are offered once again in the following countries of the Eurozone: Netherlands (1.44%)*, Cyprus (1.24%), France (0.99%), Italy (0.91%), and Greece (0.62%).
Some minor changes occurred at the bottom of the ranking list. Due to a slight increase of the average interest rate of Luxembourg (+0.05 percentage points to 0.12%), the lowest interest rates can be found again in Spain (0.09%). Similarly low interest rates are currently offered by banks from Slovenia (0.14%), Belgium (0.14%), and Germany (0.15%).

*The percentage of 1.44 in the Netherlands (according to ECB data) is not in line with our research on the Dutch comparison site Spaarrente: According to the portal a maximum of 0.80 percent is available. 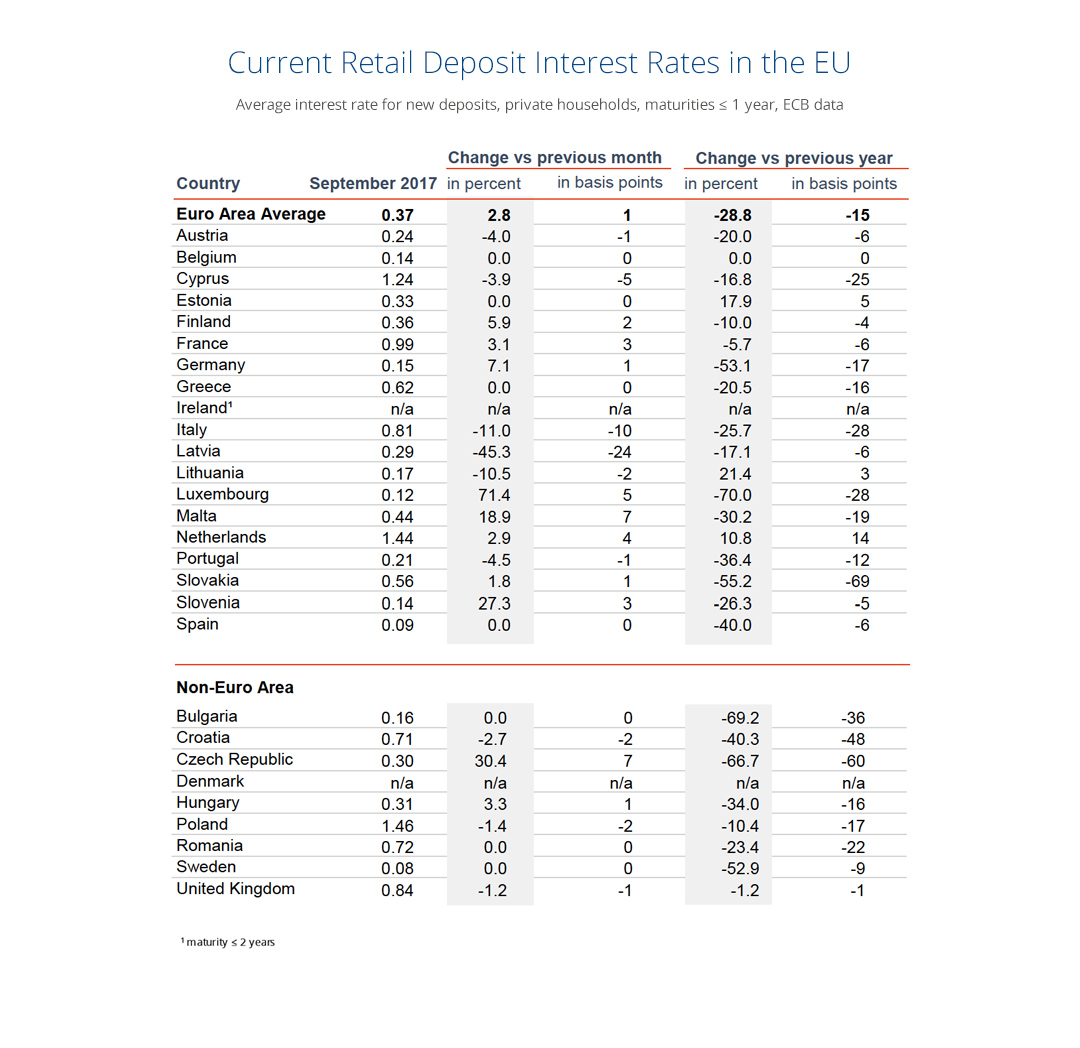 Highest Retail Deposit Interest Rates in the EU:
Our own research regarding the best local offers with maturities of 1 year and 3 years (based on the respective top 5 term deposit offers) shows little change compared to last month.
Italian 1-year rates declined by 0.07 percentage points to 1.54% but are still the highest in the Eurozone, followed by 1-year rates from Portugal (1.07%), and France (0.98%). Also 3-year rates were again the highest in Italy (2.01%). French interest rates with maturities of 3 years increased by 0.11 percentage points to 1.25%, followed by interest rates from Austria (1.15%). The lowest average interest rates for 1-year and 3-year deposits can be found once again in Ireland and Belgium. 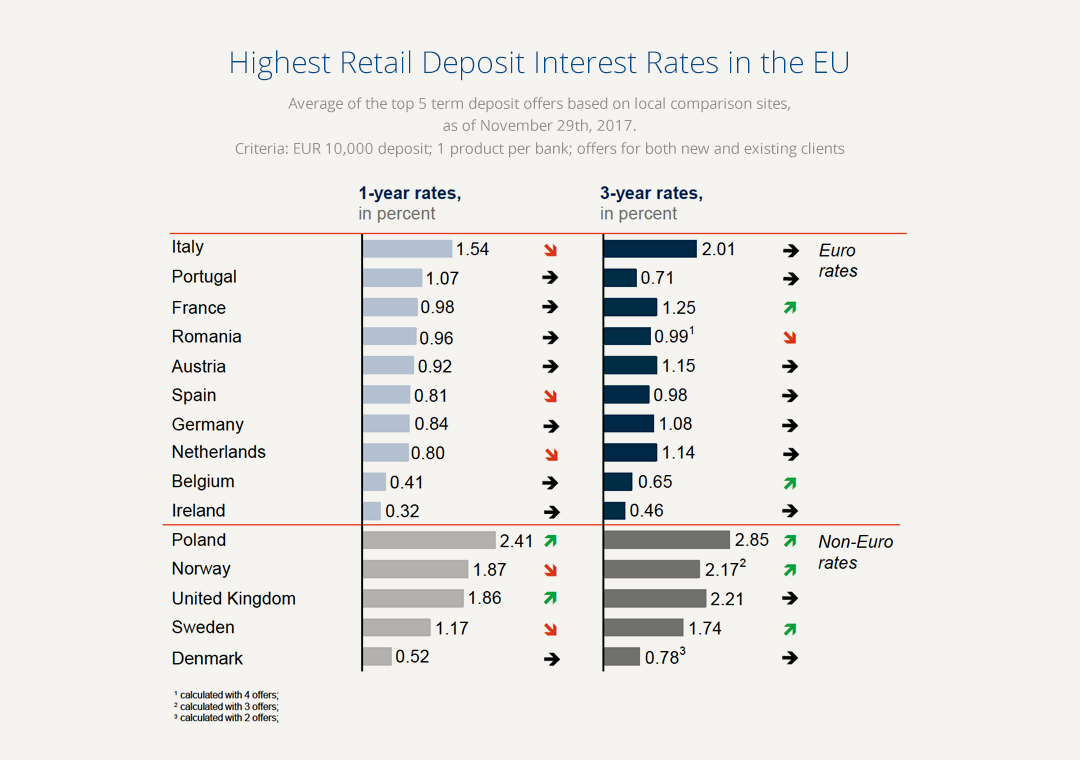 Retail Deposit Interest Rates of the 3 largest banks:
The results of our analysis of average interest rates of the three largest banks of each country are disappointing: Most major banks from the Eurozone are still offering close-to-zero interest rates that are way below the local averages, resulting in high ratios of the 3 largest banks versus the top-5 term deposit offers in the local markets.
The largest German (0.03%) and Dutch banks (0.04%) offer only a fraction of the best local offers from Germany (0.84%) and the Netherlands (0.80%) that are 28 and 20 times higher, respectively. On the other hand, major banks from Ireland (0.22%) and France (0.28%) still offer around two-thirds and a quarter of the average interest rates of their local top-5 counterparts. 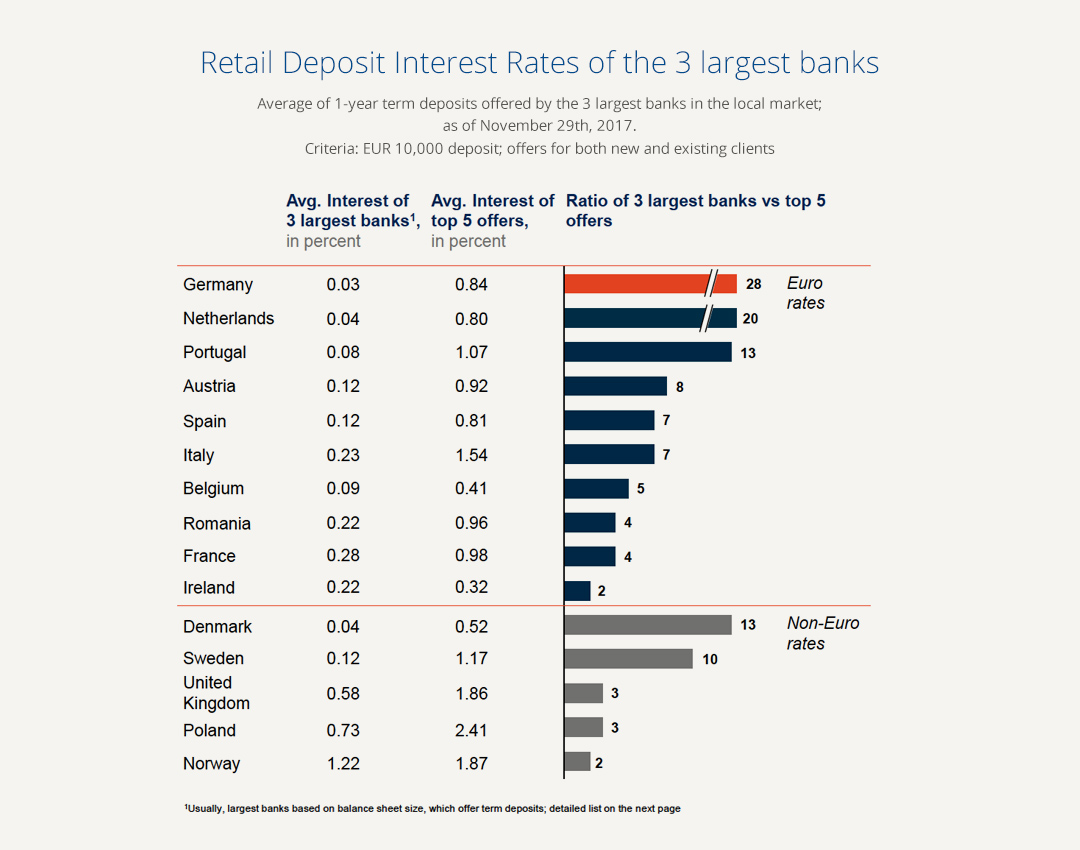 As of November 29th; Sources: