Highest Retail Deposit Interest Rates in the EU:
Compared to the previous month, there were no changes in the ranking of countries: Italy remains the best ranked country (1.50%) and Ireland at the bottom of the ranking (0.29%). The average of the top 5 term deposit offers from Portugal with maturities of 1 year and 3 years decreased sharply, by 0.04 and 0.12 percentage points, respectively, in the past month. In the course of the past 12 months, Portuguese 1-year rates decreased by 18.3% and 3-year rates even by 50.9% – the largest decrease of all countries within the period mentioned. On the other hand, German 1-year and 3-year rates seem to have stabilized and even increased in the past 12 months: German 1-year rates increased by 6.3% and 3-year rates by 15.0%. 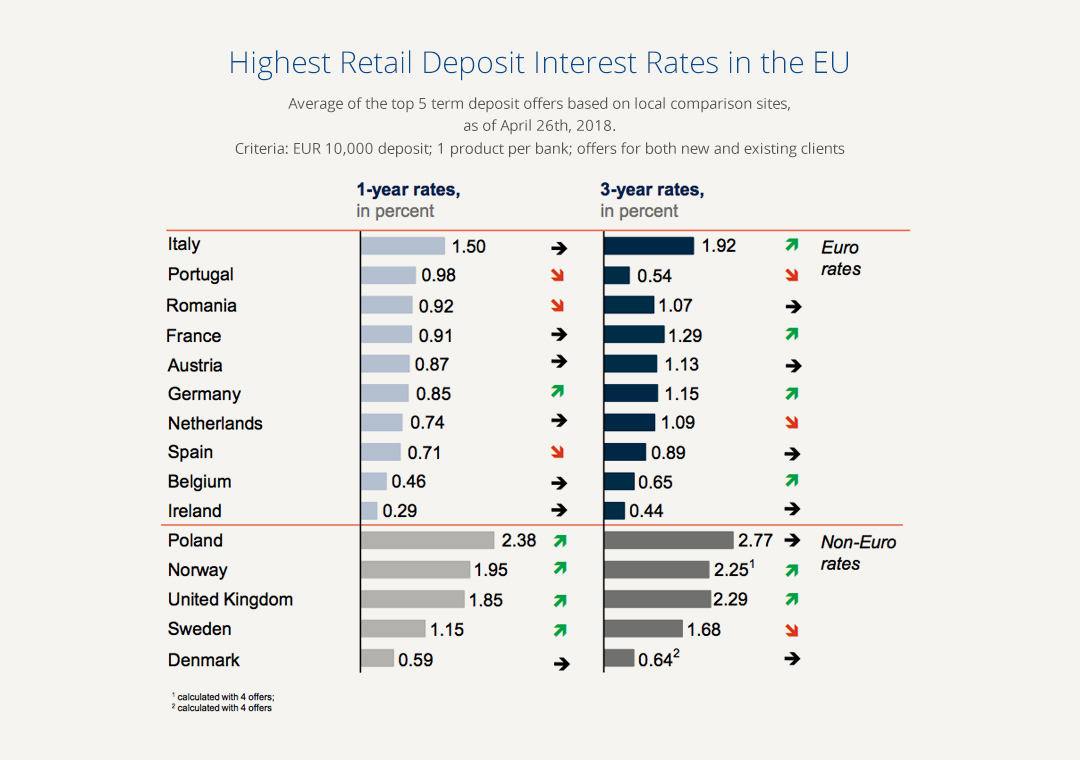 Retail Deposit Interest Rates of the 3 Largest Banks:
Almost all major banks from the Eurozone are still offering close-to-zero interest rates that are only a fraction of the local averages, resulting in high ratios of the 3 largest banks versus the top 5 offers. With the exception of Germany, Netherlands and Portugal, ratios did not change compared to the previous month: Due to an increase of the average interest rate of local top offers in Germany, the ratio has risen to 28 and is close to all-time highs. The three largest banks in the Netherlands decreased their 1-year term deposit offers on average by 0.02 percentage points, which resulted in an increase of the Dutch ratio to 15. Average interest of local top offers in Portugal decreased by 0,03 percentage points – as a result the ratio has fallen by one point to 12. Ireland is still the only country where major banks are offering the highest retail deposit interest rates in the country! 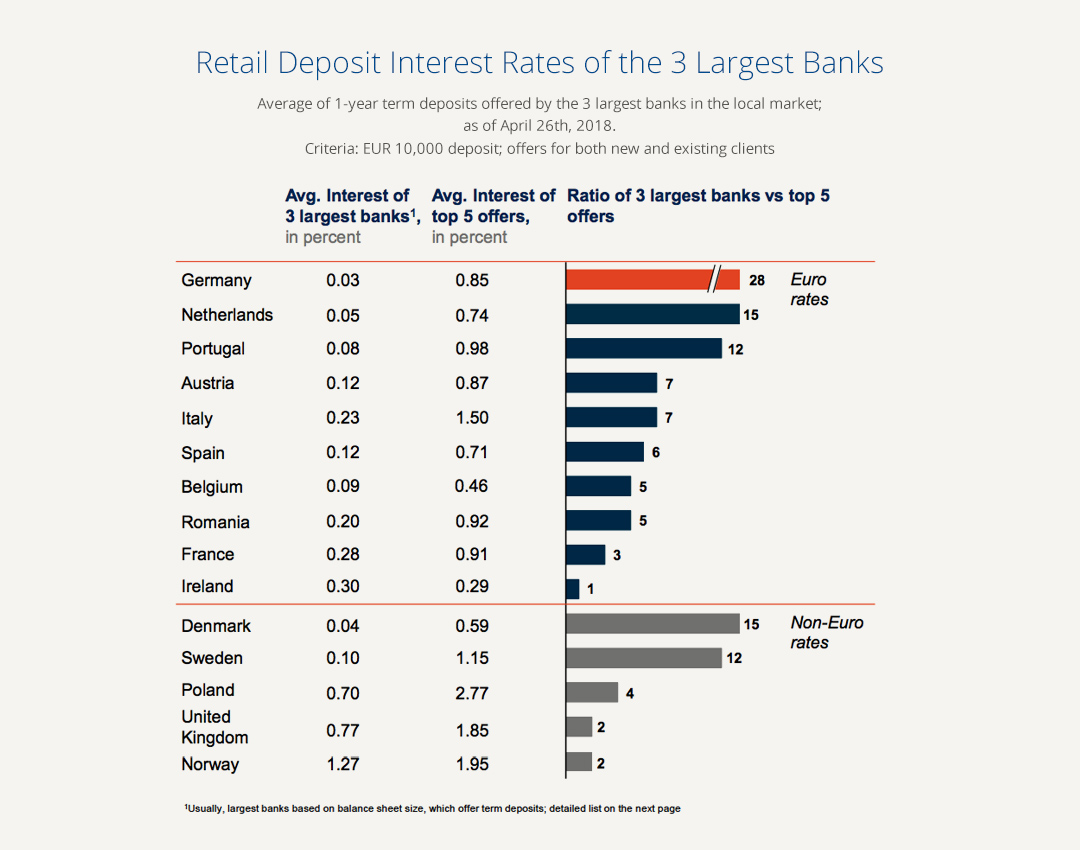 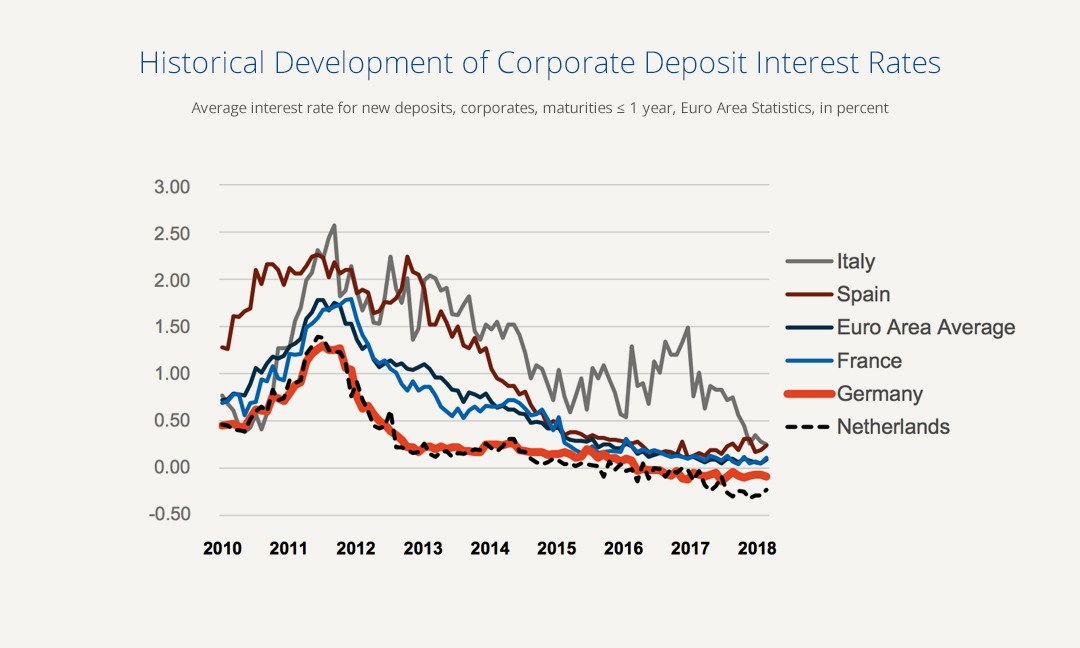 Current Corporate Deposit Interest Rates in the Euro Area:
In the past month, the Latvian corporate deposit interest rate has increased by an incredible 122-fold to 1.22%! Corporate deposit interest rates from Cyprus and Greece continue to remain at a high level of 1.10% and 0.94%, respectively. Banks from the Benelux countries and Ireland are offering the lowest interest rates in the euro area: Netherlands (-0.23%), Belgium (-0,15%), Luxembourg (-0.10%) and Ireland (-0.10%). 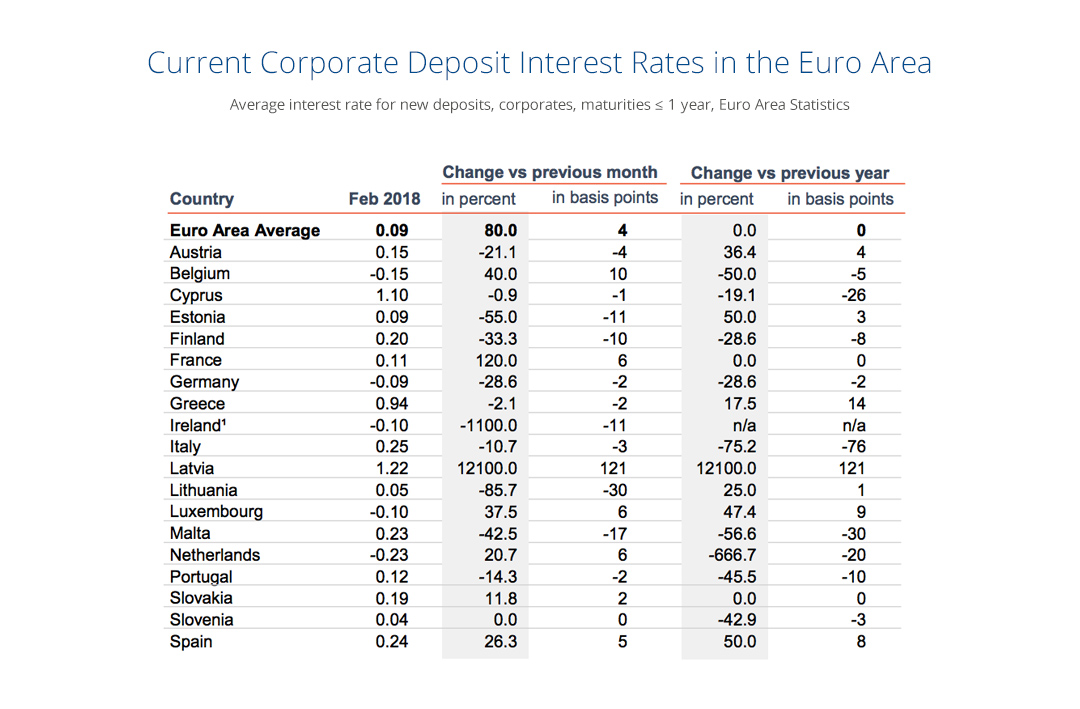