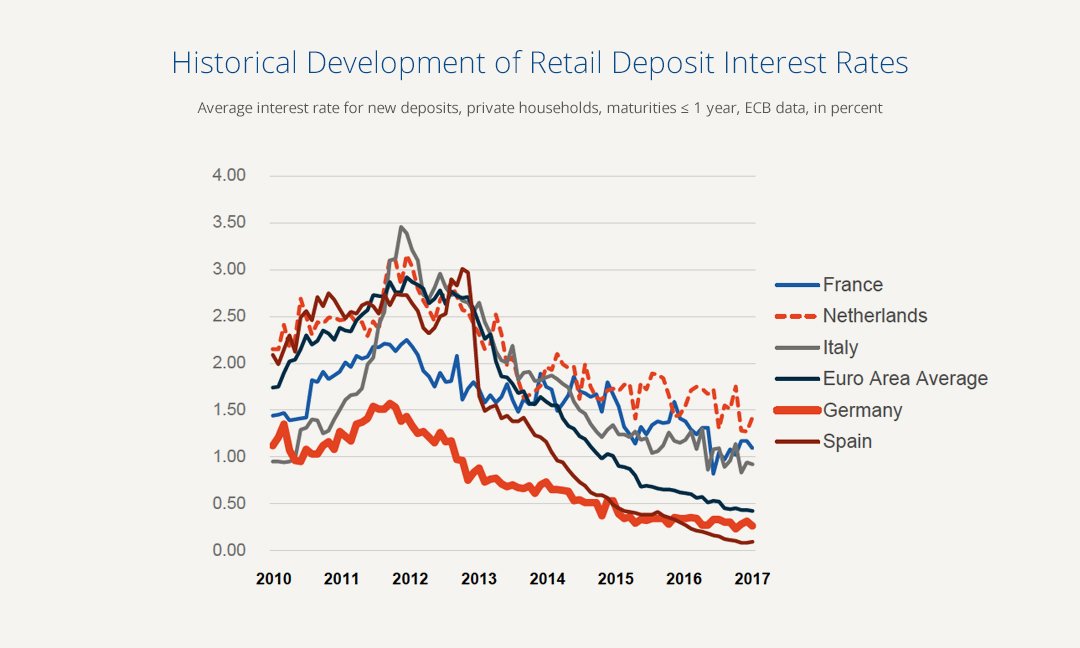 Development of Retail Deposit Interest Rates 2010-2017:
Strong negative long-term trend
Since its peak in 2012, average interest rates in the euro area dropped dramatically by 86% to 0.42% and are expected to stay at this record low for an extended period. Spanish savers had to cope with an even more devastating development after enjoying the best rates in Europe during 2013: Interest rates dropped by 97% and stand today at 0.09%. French interest rates dropped only by 52% to 1.09% and have remained relatively stable in the past two years. 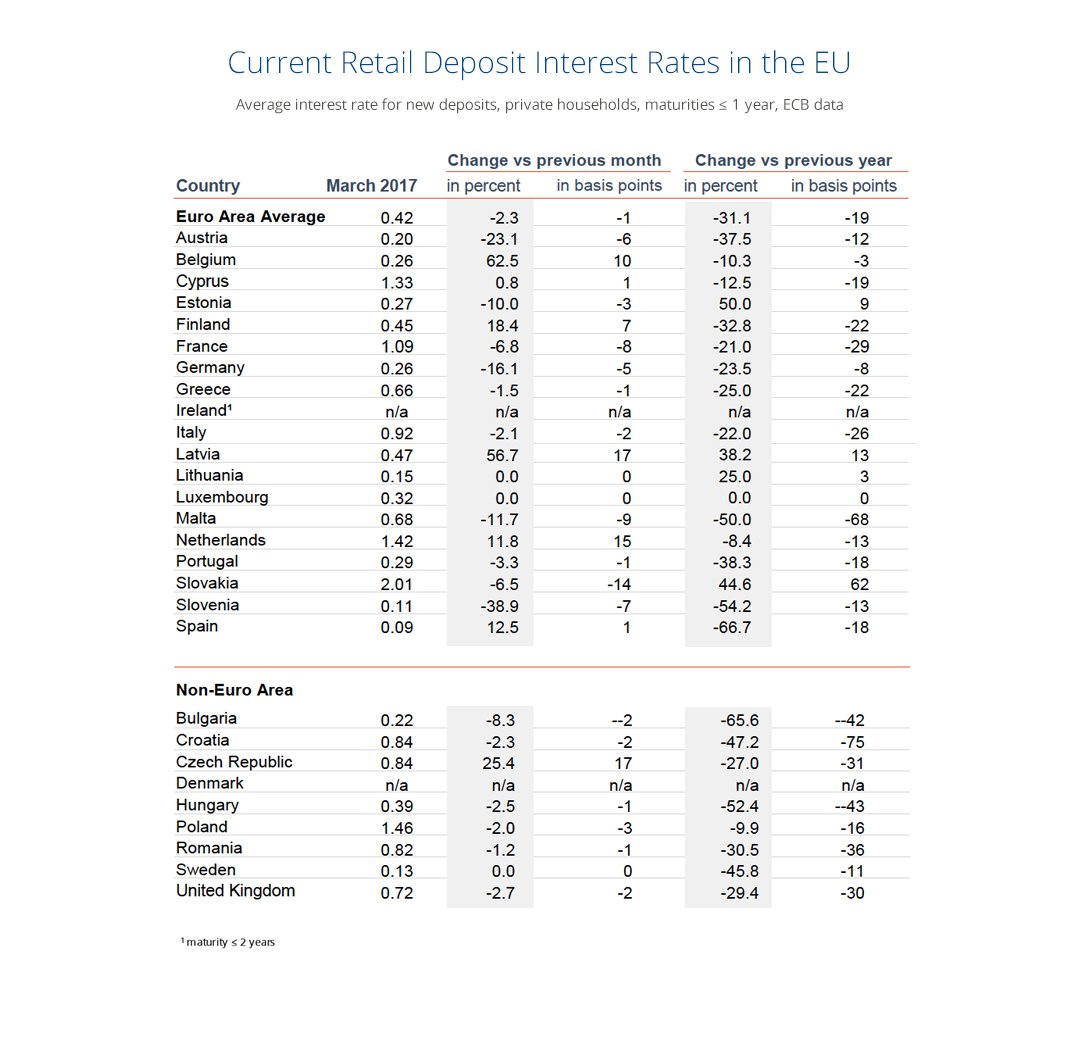 Current Retail Deposit Interest Rates in the EU:
Spain and Slovenia are the biggest losers
Over the past year, Spain also suffered the biggest decrease of interest rates (-67%), followed by Slovenia (-54%) and Malta (-50%). On the other hand, savers from Estonia enjoyed the largest increase of 50% to 0.27% during the past 12 months. Slovenia (-39%), Austria (-23%) and Germany (-16%) suffered the biggest losses during the past month. Biggest winners in the past month were savers from Belgium (63%), Latvia (57%), and Finland (18%). 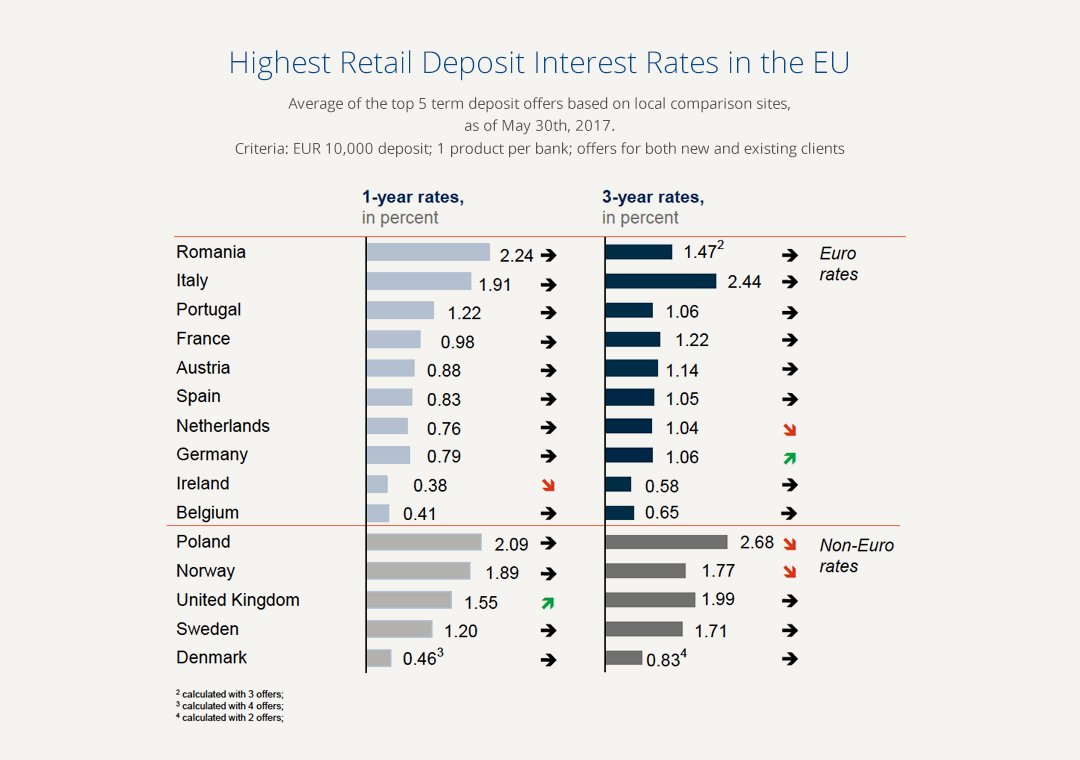 Highest Retail Deposit Interest Rates in the EU:
Italian and French savers are enjoying the best offers
In April, interest rates of term deposits with a maturity of 1 year were the highest in the eurozone in Italy (1.91%), Portugal (1.22%) and France (0.98%). Savers from Italy (2.44%) and France (1.22%) could also profit the most from term deposits with maturities of 3 years. 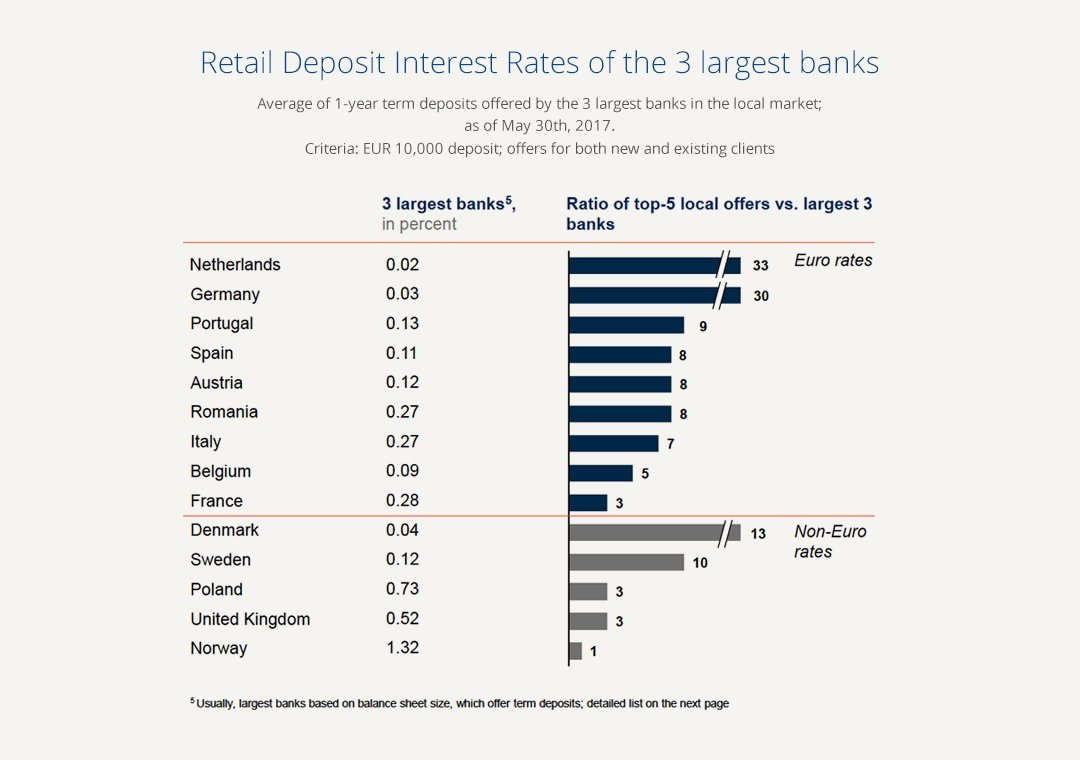 Retail Deposit Interest Rates of the 3 largest banks:
Large Dutch and German banks offer their clients almost no interest at all
The largest banks in the Netherlands (0.02%) and Germany (0.03%) offered by far the lowest interest rates in April. By doing so, they also created the largest gaps between their offers and those of their top 5 local counterparts. Meanwhile, at the other end of the scale, the largest banks in France offered on average an interest rate of 0.28% and therefore still one third of the average, their top 5 local counterparts were offering.

Get Your Finances Ready: 3 Things to Do Before Leaving on Vacation

Will you take a vacation this summer and want to enjoy complete peace of mind? Then you should make sure…