Movement on the EU’s Perimeter

Berlin, 1. March 2019. The pan-European deposits platform Raisin (www.raisin.com) regularly publishes the Raisin Interest Rate Radar to explore the effects of the ECB (European Central Bank) rate policy on savers throughout Europe. This month we can see steady rates from Europe’s biggest economies while the smaller countries at all edges of the continent — plus Luxemburg at its heart — made more dramatic adjustments.

The ECB governing council has begun discussions on a new TLTRO (targeted longer-term refinancing operations) facility. The current €720bn program will begin maturing mid-2020, however loans made under the old program will stop counting as regulatory liquidity this summer. The ECB’s stated intention is to prevent banks from facing a funding cliff and to ensure the availability of credit to the real economy during an economic slowdown. A decision is not expected before the summer of this year.

Economic conditions in the Eurozone remain largely unchanged since our last Interest Rate Radar, as global trade tensions and uncertainty around Brexit persist. Eurozone inflation fell further from 1.5% in December to 1.4% in January. The IFO Business Climate Index fell 0.8 points month-on-month to 89.5, its lowest reading since 2014.

Luxembourg and Slovakia both experienced large rebounds this month with increases of 26 bps and 24 bps, respectively. For Luxembourg this represents a 70% increase compared to this time last year. The biggest losers this month are Latvia, with a 16% decrease of 4 bps as well as Cyprus which fell 14 bps. Rates in Germany have steadily hovered around 30 bps; this month, however, there was a drop by 2 bps. Although this is a 7% decrease from last month, compared to last year’s performance, there is a change of +65%.

With regards to foreign currency deposits, Bulgaria saw the largest relative increase, with 3 bps representing a 20% increase. The Czech Republic and Poland continue their upward trends with moderate increases of 4 bps and 2 bps, respectively. In the meanwhile, Denmark saw a sharp decline in rates reaching negative territory, dropping 20 bps last month representing a 167% change. Similarly, the United Kingdom’s rates continue to steadily decline and showed a decrease in 6 bps from last month. 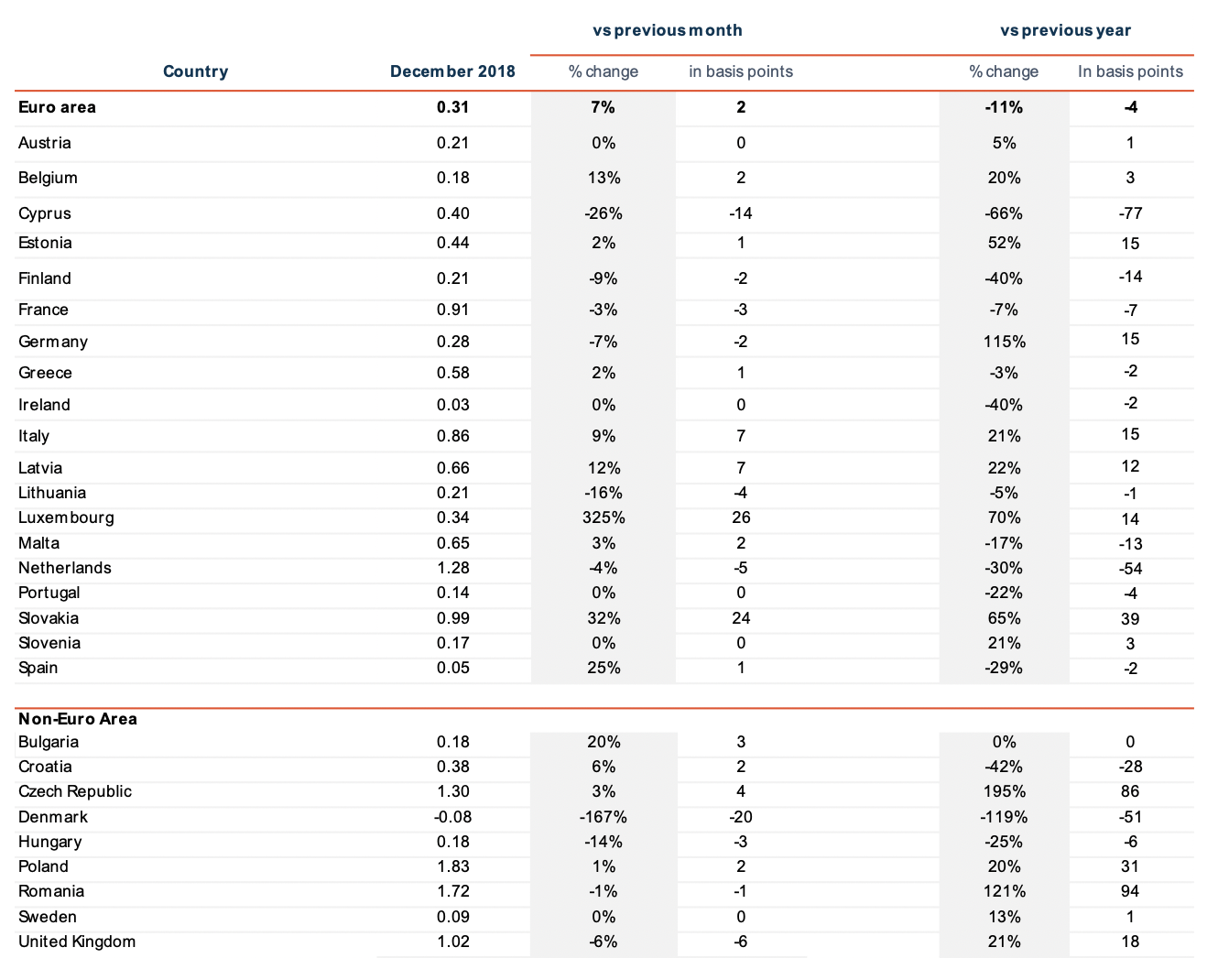 Gap between average rates and top offers may be narrowing

The interest rate statistics published by the Euro Area’s national banks suggest that on average rates increased. A glance at comparison platforms reveals that this was not true, generally, for the top offers in the EEA.  There are some winners (the UK and Norway for 1-year rates, Portugal and France for 3-year), though for most countries interest rates stayed put or even decreased.

If the upward tick in rates on average continues, together with the downward tendency we see here on top offers, this may begin to indicate a correction. We will continue to observe the trends over the next months, so stay tuned.

For Germany the top offers dipped slightly, narrowing the gap between top offers and the top 3 banks but not enough yet to consider it a trend. While the rates on Italy’s top 3 offers dropped, the average rates for Italy are still increasing.

The multiple for Denmark almost doubled: note, however, that this measurement is very sensitive and was caused here merely by the decrease of a few bps for one of the major Danish banks. 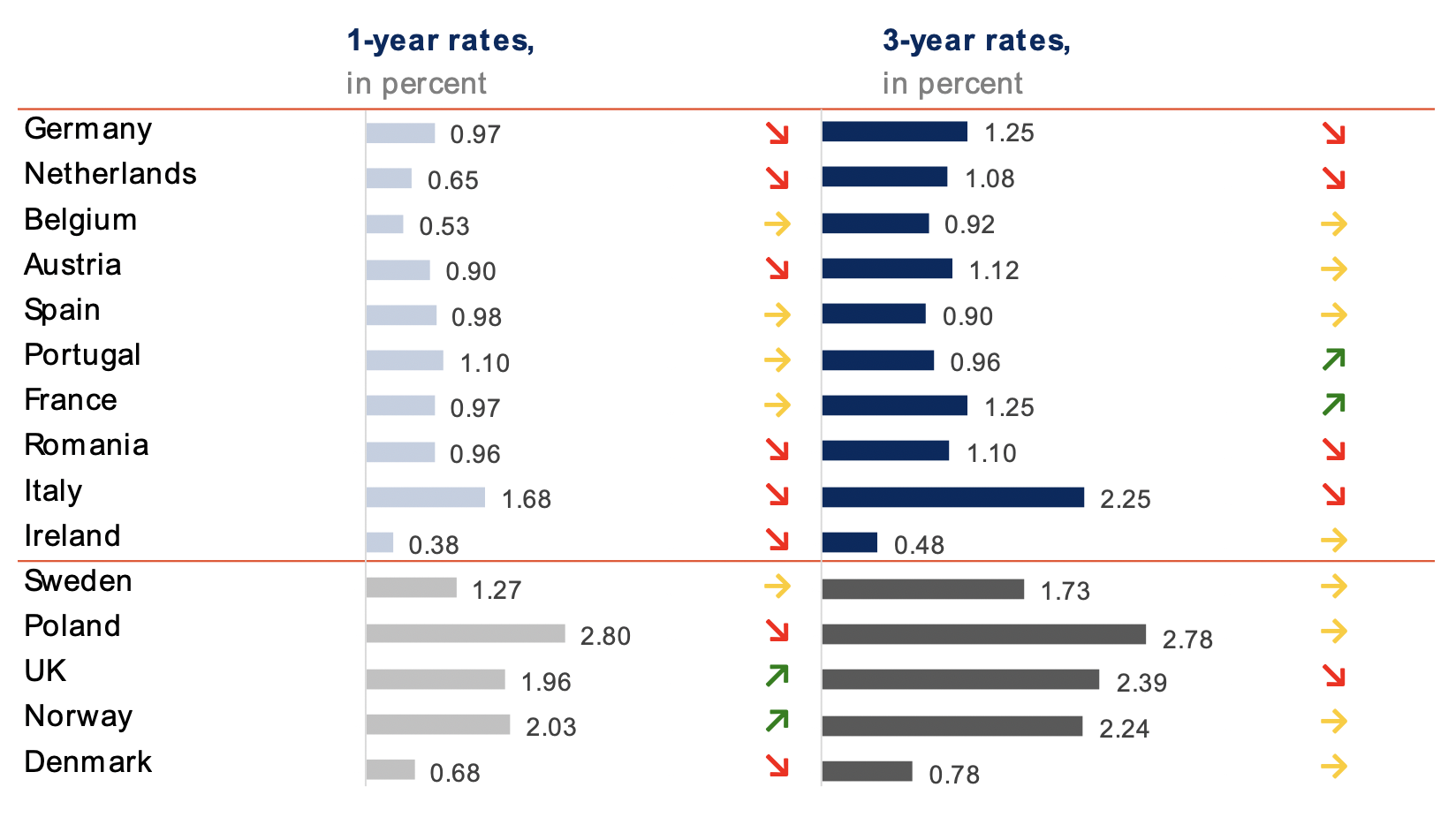 Average of the top 3 term deposit offers for retail customers based on local comparison sites as of 21/02/2019. Criteria:  EUR 10,000 deposit; 1 product per bank; offers for both new and existing clients. 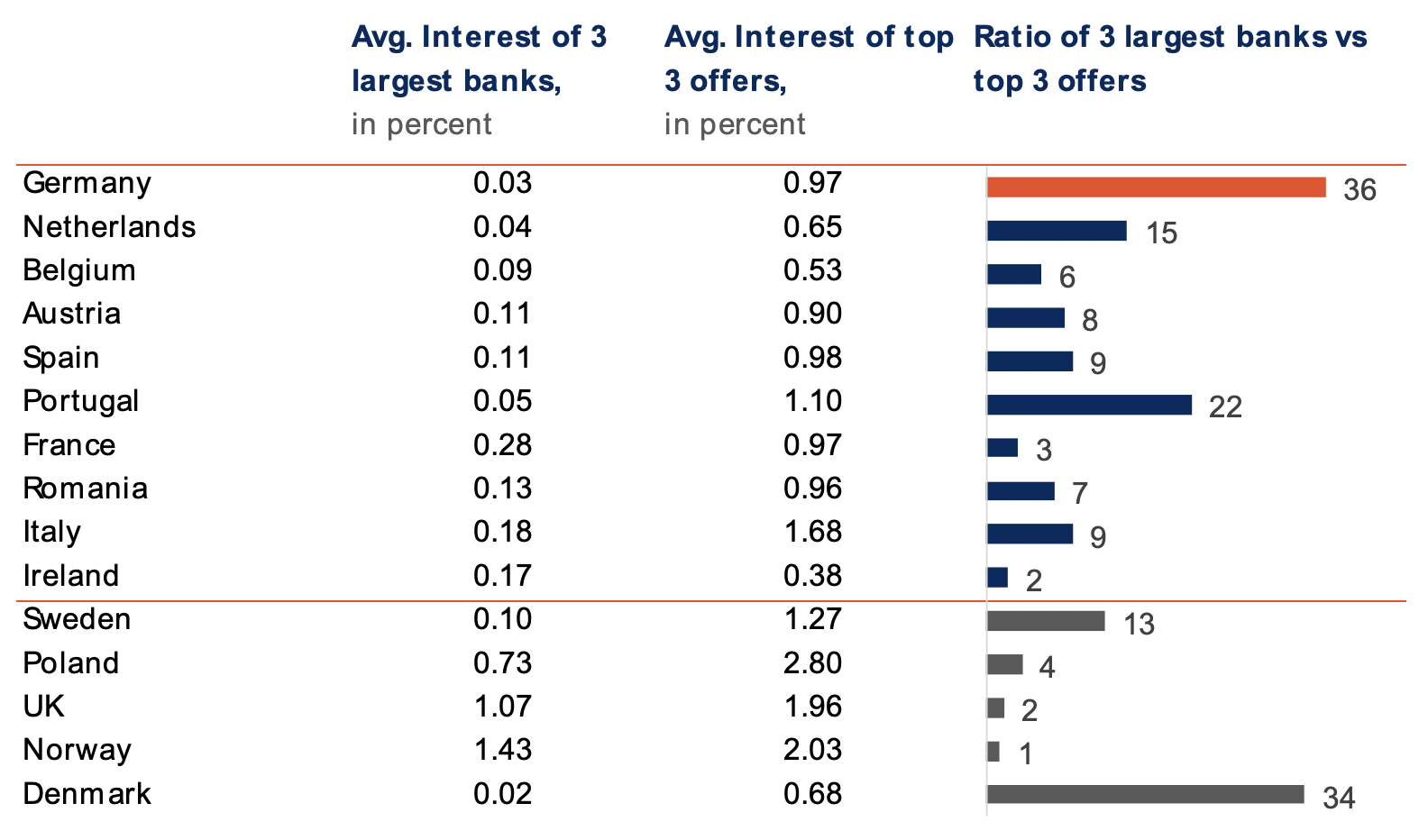 On average corporate deposits decreased yet again. Lithuania overturned the growth it exhibited last month, by decreasing 11 bps, representing a decline of 64.7% this month. Ireland, hovering around 0%, experienced a decrease this month to -2 bps, while Slovenia dropped 5 bps to 0%. Since last year, Estonia and Spain are outliers, having increased 66.7% and 129.4% to 25 bps and 39 bps, respectively. 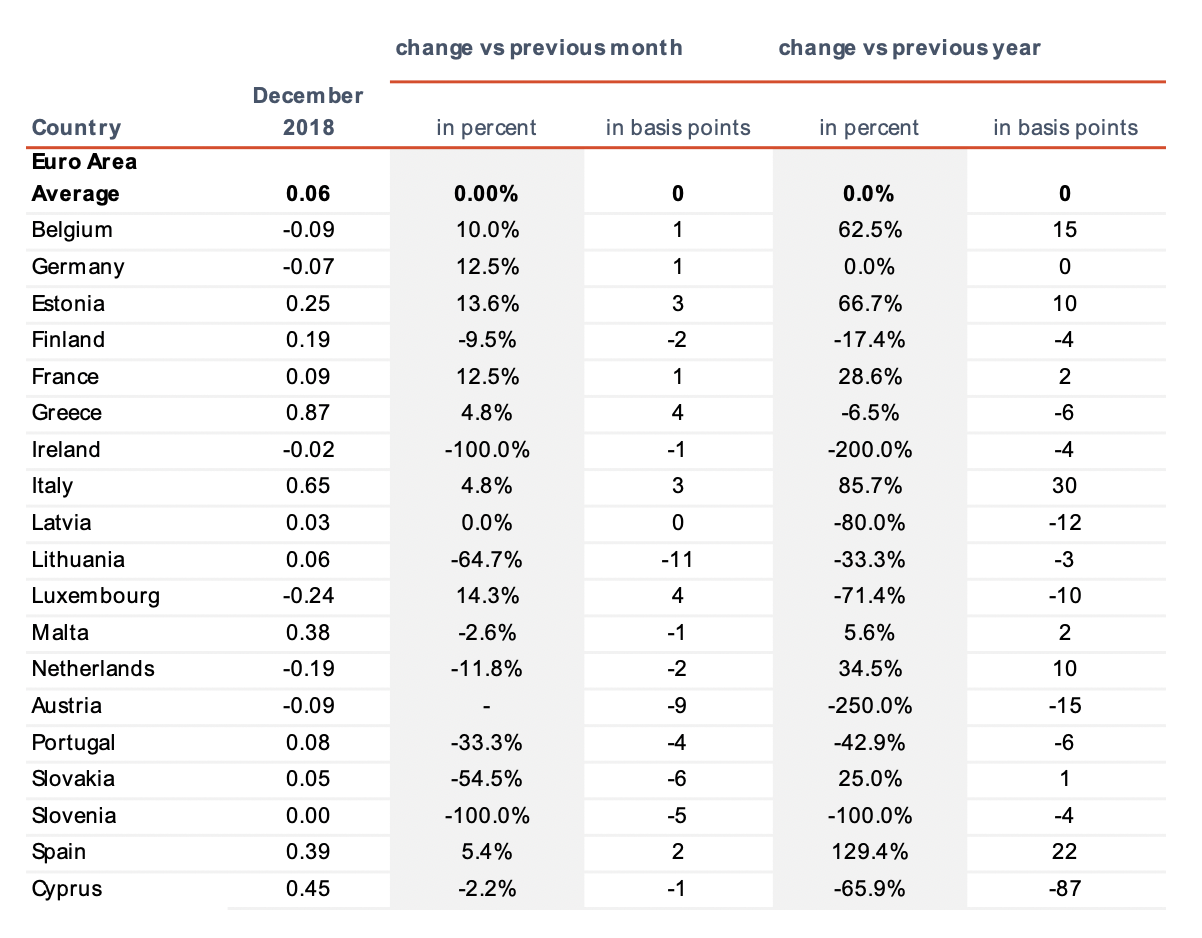 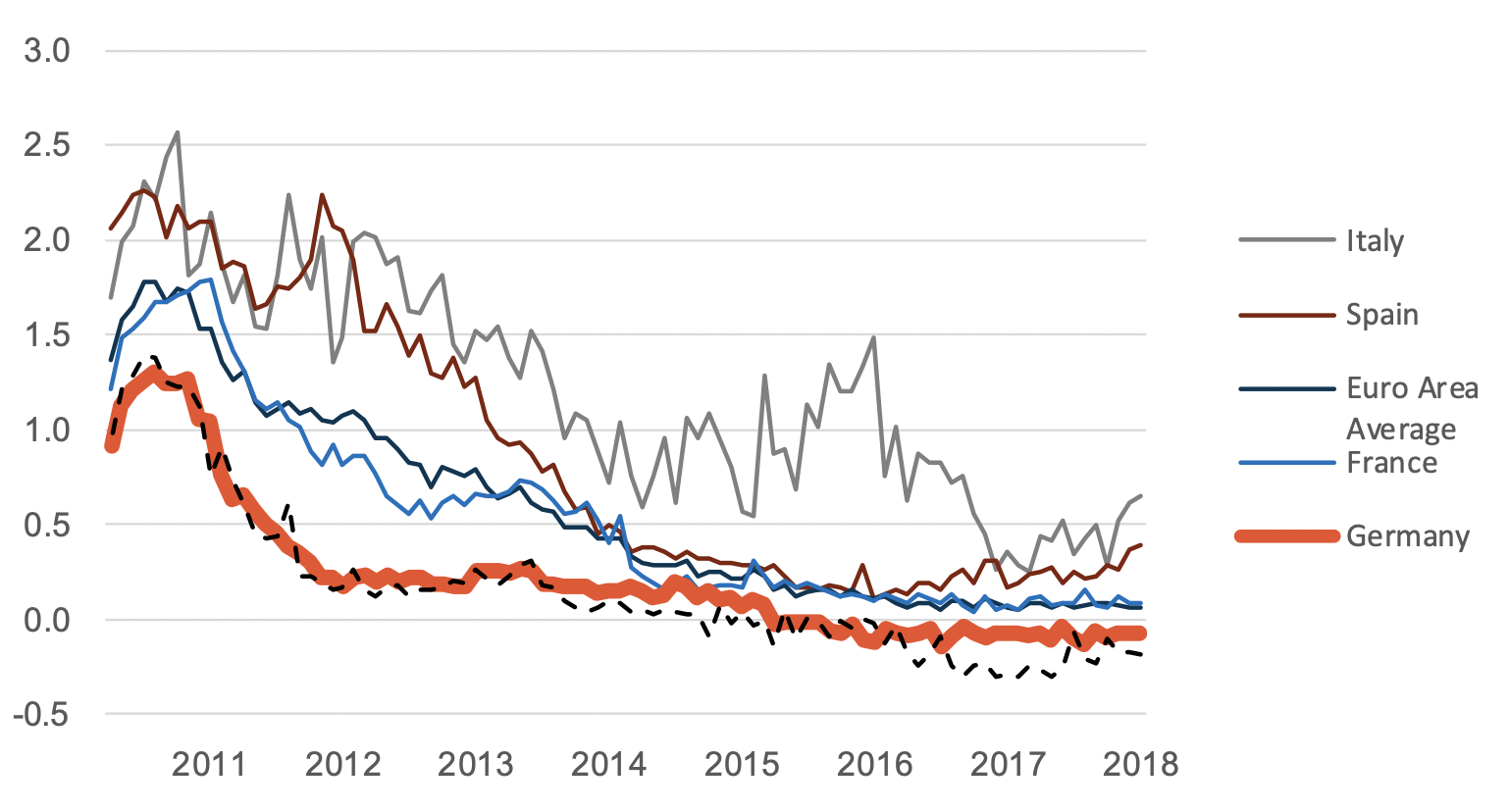 About Raisin
A trailblazer for open banking and the leading pan-European one-stop shop for online savings and investments, Berlin-based fintech Raisin was founded in 2012 by Dr. Tamaz Georgadze (CEO), Dr. Frank Freund (CFO) and Michael Stephan (COO). Raisin’s platforms — under the brand WeltSparen in the German-speaking world — are breaking down barriers to better savings for European consumers and SMEs: Raisin’s marketplace offers simple access at no charge to attractive and guaranteed deposit products from all over Europe, as well as globally diversified, cost-effective ETF portfolios (currently available in Germany). With one online registration, customers can choose from all available investments and subsequently manage their accounts. Since launch in 2013, Raisin has brokered 11 billion EUR for more than 165,000 customers in 31 European countries and 65 partner banks. Raisin was named to Europe’s top five fintechs by the renowned FinTech50 awards and is backed by prestigious European and American investors such as PayPal, Thrive Capital, Index Ventures and Ribbit Capital.

Experts agree: Poland will be once again one of the most dynamic economies in Europe. The National Bank o…